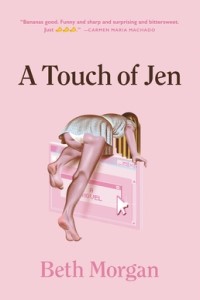 From the Publisher: Remy and Alicia, a couple of insecure  service workers, are not particularly happy together. But they are bound by a shared obsession with Jen, a beautiful former co-worker of Remy’s who now seems to be following her bliss as a globe-trotting jewelry designer. In and outside the bedroom, Remy and Alicia’s entire relationship revolves around fantasies of Jen, whose every Instagram caption, outfit, and new age mantra they know by heart.

Imagine their confused excitement when they run into Jen, in the flesh, and she invites them on a surfing trip to the Hamptons with her wealthy boyfriend and their group. Once there, Remy and Alicia try (a little too hard) to fit into Jen’s exalted social circle, but violent desire and class resentment bubble beneath the surface of this beachside paradise, threatening to erupt. As small disturbances escalate into outright horror, we find ourselves tumbling with Remy and Alicia into an uncanny alternate reality, one shaped by their most unspeakable, deviant, and intoxicating fantasies.  Is this what “self-actualization” looks like?

Part millennial social comedy, part psychedelic horror, and all wildly entertaining, A Touch of Jen is a sly, unflinching examination of the hidden drives that lurk just outside the frame of our carefully curated selves.

To call A Touch of Jen a horror novel feels like a disservice. That would be like calling coffee hot bean water. Really doesn’t do it justice.

Remy is a Holden Caulfield guy. He thinks he’s perfect, and obviously everyone else is stupid and fake. His girlfriend Alicia is devoted to him more than he deserves, but he’s cruel to her and picks on her insecurities. Both of them are obsessed with Jen, Remy’s former coworker and Regina George archetype (“In general? You touch me too much. We are not in that kind of relationship,” Jen says.) Jen’s boyfriend Horus is a classic laid-back-nice-guy-surfer-dude, or at least that’s how he presents. When Remy and Alicia run into Jen in an Apple store and she casually invites them on a surfing trip in the Hamptons, it’s a big, confusing surprise.

Millennials and their social media identity, I tell you what. Are you what you post on Instagram? Are you what you are around other people? WHO ARE YOU? What makes you YOU? Are you YOU if nobody’s around to see it? There are several instances in which the author brings our attention back to these questions. “Who are they performing this for?” Remy asks when Jen and her boyfriend are goofing around with sunscreen. The idea that every little act is calculated so that the actor will be perceived in a certain way is pretty much the backbone of this novel. At least until the last part. Which was just… ???? All the question marks. Someone please read this and tell me what even happened and what it all means. I’m not kidding. Check it out from GPL, read it, and email me. I can’t stop thinking about it and I NEED to talk to someone about it.