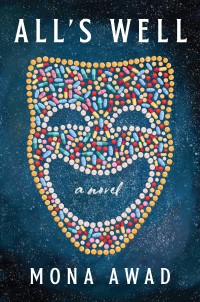 From the publisher: From the critically acclaimed author of Bunny, a darkly funny novel about a theater professor suffering chronic pain, who in the process of staging a troubled production of Shakespeare’s most maligned play, suddenly and miraculously recovers.

Miranda Fitch is the literal example of “those who can’t do, teach.” Because she can’t act the way she used to–an accident involving a bone-crunching fall off the stage during a production of Macbeth left her with a bad back, hip, and leg, and now she can barely walk from her office to the stage at her job as a college theater director.

Mona Awad does here what she did with Bunny and brings the macabre and magical realism into the picture. Miranda is quickly losing all hope with everything: the doctors and therapists who believe her pain is all in her head, her best friend who agrees with those doctors, the students who are on the verge of rebellion (they just “don’t get” All’s Well That Ends Well and they would much rather perform Macbeth)…. Until she meets three mysterious characters (see also: literally the very first line of Macbeth) who seem to know exactly what she’s going through–three characters who can show her what things could be like without the pain.

The pace of this book is wicked fast. Awad explores some tough subjects–how women’s pain is sometimes written off as psychosomatic or at least exaggerated because of how gender biases affect medical professionals’ assessment of pain (seriously), and how relationships are affected when chronic pain plays the third wheel. The whole novel could have easily become preachy and dry, but Awad’s knack for dark comedy provides the perfect vessel for these themes.

At times, the characters can seem a little too one-dimensional, but we’re seeing them through Miranda’s point of view, and it seems like Awad has done this intentionally. They’re all just players on the stage that is Miranda’s life, right? It’s necessary for them to be archetypes for Awad’s satire to work: the alternative physical therapists with their unorthodox (see also: harmful)  methods, the doctors who say it’s just stress and anxiety, the theater diva whose mommy and daddy could fund the whole program if they wanted to, the conniving and manipulative rival professor in the theater department, etc. Even though they’re all so frustrating, there’s something funny and over-the-top about them sometimes. I mean, come on. Miranda’s best friend sleeps with her bearded dragon on her pillow next to her face.

It’s definitely not a book for everybody. Truly, it’s just plain weird. But I think that’s what makes it appealing. I probably should have re-read Macbeth and All’s Well That Ends Well before reading this, so if you’re thinking of reading this, maybe keep that in mind. But it’s not necessary to read those to enjoy All’s Well. Witchcraft and three weird old-timey theater ghosts, Shakespeare everywhere, grungy bad-boy-turned-good love interest, and an ending that wraps everything up with a cherry on top? I was all in from the start.