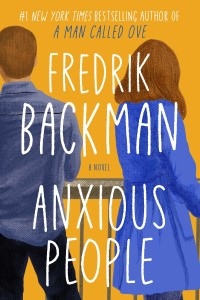 From the #1 New York Times bestselling author of A Man Called Ove comes a charming, poignant novel about a crime that never took place, a would-be bank robber who disappears into thin air, and eight extremely anxious strangers who find they have more in common than they ever imagined.

According to the description, Anxious People is about a would-be bank robber and eight anxious strangers. That is true, but as Backman says throughout the book, it’s also a story about a hostage situation, a bridge, human connection, mental health, idiots, and so much more. If, like me, you’re a fan of almost-too-cheesy ensemble cast movies like Love Actually, where everyone is somehow connected and gets a happy, neatly tied up ending, this book is for you. Bonus points if you like a good sprinkling of humor and insightful takes on humanity.

The story takes place in a small town in Sweden. After a failed attempt at robbing a bank, the would-be bank robber tries to evade police by hiding in an apartment building, only to end up accidentally taking a group of people who are in one of the apartments for an open house hostage. While the bank robber tries to figure out an escape (and the hostages largely ignore the bank robber to fight over who gets to buy the apartment) two police officers with no experience in dealing with a hostage situation — but a lot of experience in being frustrated by each other — try to figure out a way to get everyone out safely. The plot jumps back and forth in time between before the hostages are freed, and after. The “after” is told mostly via witness interviews, as the police officers question the hostages to figure out what happened, because the bank robber has disappeared and no one seems to know how.

If you only read the description, you might be tricked into thinking this is a thriller. This is not the case by any means. It’s more a mix of mystery and comedy. It has just enough mystery and twists that it kept me hooked and trying to figure out what was going to happen, but also a lot of introspection and growth for all of the characters. The characters are all very realistic, in that they all seem incredibly annoying, mean, or stupid until you get to know them and learn their backgrounds. That’s the basic theme of the book: that being a human, especially an adult human, is hard, and most of us are trying our best even if it doesn’t look like it. From the very first page, the book sets the tone and theme with the quote “This story is about a lot of things, but mostly about idiots. So it needs saying from the outset that it’s always very easy to declare that other people are idiots, but only if you forget how idiotically difficult being human is. Especially if you have other people you’re trying to be a reasonably good human being for.” It is also certainly a book about the anxieties all humans deal with every day. For some of the characters, it’s general anxiety; for some, it’s anxieties about specific things like parenthood or loneliness. Their anxieties are part of what makes the whole book so relatable. If you relate to having anxieties about being an adult human, you will probably relate to Anxious People.

Despite the fact that we get about 15 characters’ backstories, it wasn’t hard at all to keep track of who was who. Backman does a great job of making every character unique and well-rounded. I would also recommend the audiobook; the narrator was amazing, and had unique voices for every single character, which also helped to keep everyone straight. It’s heartfelt, funny, and a great reminder of the importance of human connection and treating people with empathy and grace.

Anxious People is available for checkout at the Galesburg Public Library. It is also available as an ebook.