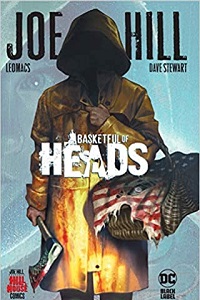 From the publisher: #1 New York Times bestselling author Joe Hill asks, “With a cursed Viking axe, what can you accomplish?” and June Branch is ready to answer!

It seems like Joe Hill is everywhere lately: his graphic novel series Locke & Key was adapted on Netflix, with the next season expected later this year. His novel NOS4A2 became a TV series on AMC. Several of his other books and short stories have been adapted for the screen as well. In Basketful of Heads, Hill returns to the graphic novel format for this horror gore-fest that reads like a combination of Stephen King and Quentin Tarantino.

June comes to Brody Island to visit her boyfriend Liam, who’s just finishing up a summer internship with the local police department. June’s peaceful visit is interrupted though when news breaks that four violent inmates have escaped from the local prison. Liam and June wait at the chief’s house while the police search for the prisoners, but things take a turn for the dangerous when the escapees break in, kidnap Liam, and threaten June. Armed with only a strange Viking axe from the chief’s personal collection, June must defend herself, get help, rescue Liam, and find out what the inmates are really after.

This is a pretty straightforward gore-fest, with a few plot twists and some morbid humor thrown into the mix. Imagine the Kill Bill movies, except instead of a sword she has an axe that leaves its victims alive after their heads are cut off. Throw in a mystery about why the inmates came after Liam, and the result is a bloody, sometimes funny page-turner that will please fans of horror and crime stories alike.

Basketful of Heads is available for checkout at the Galesburg Public Library.