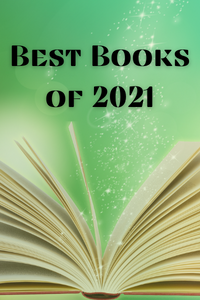 With 2021 behind us, it’s time to highlight what we — and various other online outlets — consider the Best Books of 2021. Below we’ve featured the best of the Young Adult genre, and you can find the Adult list (including Honorable Mentions) on our Readers Advisory page. See something that sounds good? Visit the catalog to put one on hold today!

Read something in 2021 that you loved? Let us know the best book YOU read this year, and be entered to win one of several gift baskets — for adults, teens, & children — that we’ll be giving away in February. Let us know your favorite by email, on our Facebook post, or by turning in an entry slip. 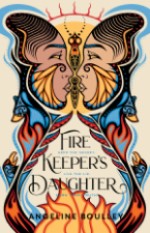 As a biracial, unenrolled tribal member and the product of a scandal, eighteen-year-old Daunis Fontaine has never quite fit in, both in her hometown and on the nearby Ojibwe reservation. Daunis dreams of studying medicine, but when her family is struck by tragedy, she puts her future on hold to care for her fragile mother.

The only bright spot is meeting Jamie, the charming new recruit on her brother Levi’s hockey team. Yet even as Daunis falls for Jamie, certain details don’t add up and she senses the dashing hockey star is hiding something. Everything comes to light when Daunis witnesses a shocking murder, thrusting her into the heart of a criminal investigation.

Reluctantly, Daunis agrees to go undercover, but secretly pursues her own investigation, tracking down the criminals with her knowledge of chemistry and traditional medicine. But the deceptions—and deaths—keep piling up and soon the threat strikes too close to home.

Now, Daunis must learn what it means to be a strong Anishinaabe kwe (Ojibwe woman) and how far she’ll go to protect her community, even if it tears apart the only world she’s ever known.

THE GILDED ONES by Namina Forna

Sixteen-year-old Deka lives in fear and anticipation of the blood ceremony that will determine whether she will become a member of her village. Already different from everyone else because of her unnatural intuition, Deka prays for red blood so she can finally feel like she belongs.

But on the day of the ceremony, her blood runs gold, the color of impurity–and Deka knows she will face a consequence worse than death.

Then a mysterious woman comes to her with a choice: stay in the village and submit to her fate, or leave to fight for the emperor in an army of girls just like her. They are called alaki–near-immortals with rare gifts. And they are the only ones who can stop the empire’s greatest threat.

Knowing the dangers that lie ahead yet yearning for acceptance, Deka decides to leave the only life she’s ever known. But as she journeys to the capital to train for the biggest battle of her life, she will discover that the great walled city holds many surprises. Nothing and no one are quite what they seem to be–not even Deka herself. 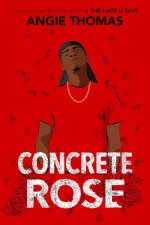 If there’s one thing seventeen-year-old Maverick Carter knows, it’s that a real man takes care of his family. As the son of a former gang legend, Mav does that the only way he knows how: dealing for the King Lords. With this money he can help his mom, who works two jobs while his dad’s in prison.

Life’s not perfect, but with a fly girlfriend and a cousin who always has his back, Mav’s got everything under control.

Until, that is, Maverick finds out he’s a father.

Suddenly he has a baby, Seven, who depends on him for everything. But it’s not so easy to sling dope, finish school, and raise a child. So when he’s offered the chance to go straight, he takes it. In a world where he’s expected to amount to nothing, maybe Mav can prove he’s different.

When King Lord blood runs through your veins, though, you can’t just walk away. Loyalty, revenge, and responsibility threaten to tear Mav apart, especially after the brutal murder of a loved one. He’ll have to figure out for himself what it really means to be a man. 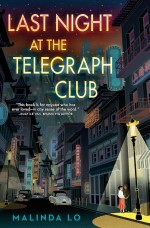 LAST NIGHT AT THE TELEGRAPH CLUB by Malinda Lo

Seventeen-year-old Lily Hu can’t remember exactly when the question took root, but the answer was in full bloom the moment she and Kathleen Miller walked under the flashing neon sign of a lesbian bar called the Telegraph Club.

America in 1954 is not a safe place for two girls to fall in love, especially not in Chinatown. Red-Scare paranoia threatens everyone, including Chinese Americans like Lily. With deportation looming over her father—despite his hard-won citizenship—Lily and Kath risk everything to let their love see the light of day. 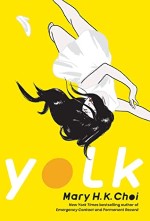 Jayne Baek is barely getting by. She shuffles through fashion school, saddled with a deadbeat boyfriend, clout-chasing friends, and a wretched eating disorder that she’s not fully ready to confront. But that’s New York City, right? At least she isn’t in Texas anymore, and is finally living in a city that feels right for her.

On the other hand, her sister June is dazzlingly rich with a high-flying finance job and a massive apartment. Unlike Jayne, June has never struggled a day in her life. Until she’s diagnosed with uterine cancer.

Suddenly, these estranged sisters who have nothing in common are living together. Because sisterly obligations are kind of important when one of you is dying. 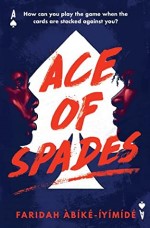 ACE OF SPADES by Faridah Àbíké-Íyímídé

An incendiary and utterly compelling thriller with a shocking twist that delves deep into the heart of institutionalized racism, from an exceptional new YA voice.

Welcome to Niveus Private Academy, where money paves the hallways, and the students are never less than perfect. Until now. Because anonymous texter, Aces, is bringing two students’ dark secrets to light.

Talented musician Devon buries himself in rehearsals, but he can’t escape the spotlight when his private photos go public. Head girl Chiamaka isn’t afraid to get what she wants, but soon everyone will know the price she has paid for power.

Someone is out to get them both. Someone who holds all the aces. And they’re planning much more than a high-school game… 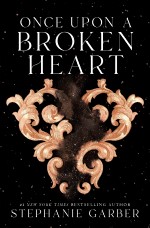 ONCE UPON A BROKEN HEART by Stephanie Garber

For as long as she can remember, Evangeline Fox has believed in true love and happy endings…until she learns that the love of her life will marry another.

Desperate to stop the wedding and to heal her wounded heart, Evangeline strikes a deal with the charismatic but wicked Prince of Hearts. In exchange for his help, he asks for three kisses, to be given at the time and place of his choosing.

But after Evangeline’s first promised kiss, she learns that bargaining with an immortal is a dangerous game—and that the Prince of Hearts wants far more from her than she’d pledged. He has plans for Evangeline, plans that will either end in the greatest happily ever after or the most exquisite tragedy…

TOKYO EVER AFTER by Emiko Jean

Izumi Tanaka has never really felt like she fit in—it isn’t easy being Japanese American in her small, mostly white, northern California town. Raised by a single mother, it’s always been Izumi—or Izzy, because “It’s easier this way”—and her mom against the world. But then Izzy discovers a clue to her previously unknown father’s identity… and he’s none other than the Crown Prince of Japan. Which means outspoken, irreverent Izzy is literally a princess.

In a whirlwind, Izzy travels to Japan to meet the father she never knew and discover the country she always dreamed of. But being a princess isn’t all ball gowns and tiaras. There are conniving cousins, a hungry press, a scowling but handsome bodyguard who just might be her soulmate, and thousands of years of tradition and customs to learn practically overnight.

Izzy soon finds herself caught between worlds, and between versions of herself—back home, she was never “American” enough, and in Japan, she must prove she’s “Japanese” enough. Will Izumi crumble under the weight of the crown, or will she live out her fairytale, happily ever after? 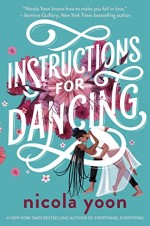 INSTRUCTIONS FOR DANCING by Nicola Yoon

In this romantic page-turner from the author of Everything, Everything and The Sun is Also a Star, Evie has the power to see other people’s romantic fates–what will happen when she finally sees her own?

Evie Thomas doesn’t believe in love anymore. Especially after the strangest thing occurs one otherwise ordinary afternoon: She witnesses a couple kiss and is overcome with a vision of how their romance began . . . and how it will end. After all, even the greatest love stories end with a broken heart, eventually.

As Evie tries to understand why this is happening, she finds herself at La Brea Dance Studio, learning to waltz, fox-trot, and tango with a boy named X. X is everything that Evie is not: adventurous, passionate, daring. His philosophy is to say yes to everything–including entering a ballroom dance competition with a girl he’s only just met.

Falling for X is definitely not what Evie had in mind. If her visions of heartbreak have taught her anything, it’s that no one escapes love unscathed. But as she and X dance around and toward each other, Evie is forced to question all she thought she knew about life and love. In the end, is love worth the risk? 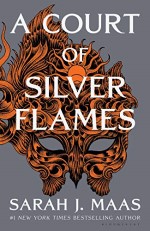 A COURT OF SILVER FLAMES by Sarah J. Maas

Nesta Archeron has always been prickly-proud, swift to anger, and slow to forgive. And ever since being forced into the Cauldron and becoming High Fae against her will, she’s struggled to find a place for herself within the strange, deadly world she inhabits. Worse, she can’t seem to move past the horrors of the war with Hybern and all she lost in it.

The one person who ignites her temper more than any other is Cassian, the battle-scarred warrior whose position in Rhysand and Feyre’s Night Court keeps him constantly in Nesta’s orbit. But her temper isn’t the only thing Cassian ignites. The fire between them is undeniable, and only burns hotter as they are forced into close quarters with each other.

Meanwhile, the treacherous human queens who returned to the Continent during the last war have forged a dangerous new alliance, threatening the fragile peace that has settled over the realms. And the key to halting them might very well rely on Cassian and Nesta facing their haunting pasts.

Against the sweeping backdrop of a world seared by war and plagued with uncertainty, Nesta and Cassian battle monsters from within and without as they search for acceptance-and healing-in each other’s arms.

View more from the Adult Best Books of 2021 list, or find lists from previous years on our Readers Advisory page.