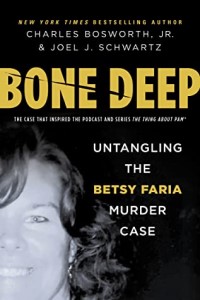 From the publisher: The explosive, first-ever insider’s account of a case that continues to fascinate the public—the shocking wrongful conviction of Russell Faria for his wife’s murder—a gripping read told by New York Times bestselling true crime expert Charles Bosworth Jr. and Joel J. Schwartz, the defense attorney who battled for justice, and ultimately prevailed.

I am not much of a True Crime reader, but something about being in a pandemic has me reading more True Crime than usual. Despite how all facts are already known about the case covered in Bone Deep, I was riveted by the narrative. I personally knew nothing about the case before picking up Bone Deep, although there has apparently been extensive media coverage, including five episodes of Dateline. If you already know a lot about the murder of Betsy Faria and conviction of Russ Faria for the crime, you might not find the book as interesting as I did. Or you might – the blurb introducing the book reveals most of the details in any event.

The authors do a good job of introducing enough detail but not too much as they describe people and places. There is some repetition as they move through the years, but it’s not excessive. They provoked outrage in me by painting a factual picture of what happened, rather than just telling me to be outraged.

The prosecution reflected how little society understands adults who like roleplaying games and fantasy movies. They painted Russ and his friends as complete weirdos. The story of Russ Faria also confirms that changes are needed in our justice system. Law enforcement and the prosecution had confirmation bias and never even considered that someone else might have murdered Betsy Faria. The judge in the case was also prejudiced; if she had allowed all the evidence to be properly introduced, it’s unlikely an innocent man would have been convicted.

The authors do show a very strong partiality for Russ Faria. I’m sure sympathy was great because the man was innocent and spent years in prison, but I also can believe that the marriage between Russ and Betsy was a rocky one. I would have liked to read more about Betsy’s family, especially her daughters, and how they reacted after Russ was exonerated and someone else was found guilty.

I read an advance reader copy of Bone Deep from Netgalley. It is scheduled to be published February 22, 2022 and will be available at the Galesburg Public Library.