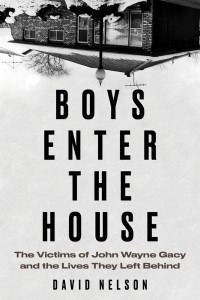 From the publisher: As investigators brought out the bagged remains of several dozen young men from a small Chicago ranch home and paraded them in front of a crowd of TV reporters and spectators, attention quickly turned to the owner of the house. John Gacy was an upstanding citizen, active in local politics and charities, famous for his themed parties and appearances as Pogo the Clown. As public interest grew, victims became footnotes and statistics, lives lost not just to violence, but to history. Through the testimony of siblings, parents, friends, lovers, and other witnesses close to the case, Boys Enter the House retraces the footsteps of these victims as they make their way to the doorstep of the Gacy house itself.

I was a senior in a suburban Chicago high school when the John Wayne Gacy story broke. I have strong memories of watching the news each night, hearing the body count rise, and then discussing the case with my classmates at school the next day. We were around the same age as many of the victims, and it was chilling.

Boys Enter the House is not a great book, but I found it fascinating. The first 150 pages is as much a history of Chicago neighborhoods and especially of gay life in Chicago in the 1970s as it is a story about the victims of John Wayne Gacy. I might have been totally bored (at least with chapters 2 and 3) if I weren’t interested in Chicago streets and communities. The book enters more familiar territory about how Gacy finally got caught starting around chapter 8.

Unfortunately the book was not well edited. In a book about Illinois published by independent publisher Chicago Review Press, I was surprised to see the city of Champaign misspelled Champagne (p. 32). Apparently they do not take the “review” part of their name too seriously. Part of Carl Sandburg’s poem “Chicago,” is quoted, and while the quotation is a good choice for the book, the text does not make clear that the quote is only an excerpt (p. 27).

The author is clearly riveted by the people he talks to, and in the early chapters I sometimes had a hard time knowing who the victims were and who were friends and relatives. Since some of the victims lived in the same neighborhoods, moved in the same circles, and frequented the same nightlife spots, it’s not surprising that the author would talk about several victims in the same chapter. However, the book would be greatly improved by information at the beginning of each chapter listing the names of the victims who appear in it. There is actually not a complete listing of the victims anywhere in the book. I got the impression that some of the people the author quoted did not know the victims that well and were responding because of the notoriety of the case. That happens, of course, with any well-known tragedy. The book ends with a strange Coda about the Disco Inferno at Comiskey Park.

Despite the indifferent editing, this book will appeal to those who remember the Gacy case and would like to know more about the victims. If you are as fascinated by the case as I am, you will want to read Boys Enter the House.

Boys Enter the House is available for checkout from the Galesburg Public Library.