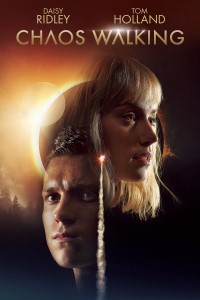 From the distributor: Two unlikely companions embark on a perilous adventure through the badlands of an unexplored planet as they try to escape a dangerous and disorienting reality where all thoughts are seen and heard by everyone.

From its conception to this, its theatrical bow at last, Chaos Walking has remained a legitimate oddity. The choice to christen it the next big Young Adult movie franchise was always a dubious one, not least because of its sci-fi gimmick: a world where, due to a native germ on the colonized planet where the film takes place, everyone’s thoughts are heard out loud in a sonic cascade fittingly dubbed “Noise.” It’s a conceit without obvious cinematic application, a built-in problem in need of creative problem-solving. Enter Charlie Kaufman, a fairly logical screenwriter hire for tackling such tricky material, but again, a decidedly strange choice for Young Adult brand-building. He soon exited the project, however, and now nine years and almost as many screenwriters later, the film arrives, nearly a half-decade since blind faith in such franchises evaporated. The film’s origin is admittedly not as commercially misguided as its belated arrival suggests: the rights to Patrick Ness’s Chaos Walking trilogy — this film roughly covers the first book, The Knife of Never Letting Go — were acquired during the Twilight heyday, before The Hunger Games tetralogy had even kicked off, and at nearly the same time that deals were made for the likes of The Maze Runner and Divergent. But a shift in studios’ franchising strategies over the 2010s means that not only did numerous teen-facing, would-be series-starters crash and burn after a single film — looking at you Beautiful Creatures, The Mortal Instruments, and The 5th Wave —  but even established properties like Divergent failed to complete their run, petering out with only one film left. And so, thanks to a remarkably protracted pre-production phase, poor initial test screenings, and delayed reshoots, the Doug Liman-directed Chaos Walking finally arrives in comically and almost unbelievably tardy fashion.

But that’s not all that’s peculiar here. The source material, while still intellectually and artistically limited in the way that most tween fiction is, defies (at least initially) much of the dramatic histrionics and structural mechanics that seemed to define the late-2000s boom of YA fantasy and dystopia. There is no brooding bad boy or large-scale governmental nefariousness or even much of a traditional narrative arc in the first of Ness’ novels. Instead, it’s very much a setup for later, larger conflict: the plot concerns a young man named Todd (Tom Holland) who lives in a small community called Prentisstown, a spacecraft crash survivor (Daisy Ridley) who is part of a second wave of planetary settlers, the former’s confusion at the latter’s lack of Noise, and their mutual escape through rugged terrain in pursuit of both truth and safety. The whole thing is of the retro/rustic dystopic lineage, yes, but to its credit, it’s also legitimately interested in well-paced world-building and in exploring its ideas rather than using them as mere window dressing to teenaged love. Again, not an obvious or even logical choice for filmic treatment, especially of the YA variety — unless someone somewhere was supremely confident in the ability to get all three of these made (spoiler: that ain’t happening) — but the absence of such narrative and emotional dramatics gives the filmmakers room to build a work rich and surprising in texture, with more space to realize its intellectual potential; think Harry Potter and the Deathly Hallows: Part 1, for a successful example.

Read more of Luke’s review at In Review Online. Chaos Walking is available for checkout at the Galesburg Public Library on DVD and Blu-Ray.