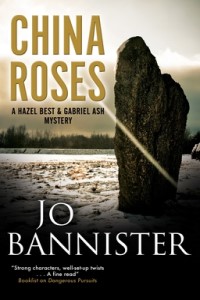 From the publisher: No one ever said: “See Norbold and die.” So why would a man from DC Hazel Best’s past cross England in order to get himself beaten senseless in this uninspiring Midlands town? Everyone assumes he was looking for Hazel. She can’t think why he would; and when David Sperrin wakes up, he can’t think why he would either. Amnesia — or something to hide? Flashbacks as Sperrin’s battered brain recovers only make the case more troubling. His sharpest memory is of a girl dying in his arms. But who, and how? Struggling to make sense of the situation, Hazel turns to her close friend Gabriel Ash for help. But Ash has problems of his own: one of his own ghosts has returned to haunt him. And the stakes are so high there’s no one, not even Hazel, he can confide in…

Jo Bannister writes in the mystery subgenre British Police Procedurals. They focus on one or more police officers solving crimes, with lots of reference to terms like DCI (Detective Chief Inspector), SOCO (scenes of crime officer), and WPC (woman police constable, thankfully not as common as it used to be). If you’ve watched and enjoyed the TV series Broadchurch or Inspector Morse, you are already a fan.

Bannister tends to focus on one series, then move on to another. (I’m still hoping she’ll revisit her Castlemere series one day). Her current series is about a police officer, Hazel Best, and her complicated relationship with her friend Gabriel Ash. Ash is a man suffering from severe PTSTD, and Hazel first met him during the course of an investigation. They’ve long moved past being officer and witness, but haven’t quite crossed into girlfriend and boyfriend. Hazel is passionate about life, her friends, and her job; Ash is highly intelligent and extremely loyal.

I like both Best and Ash, and I particularly like reading a series that presents PTSTD in an empathetic way. Ash’s therapist suggested he get a dog. He talks to the dog, a white lurcher, and she talks back telepathically. Does she really, or is that his way of coping with his stress and anxiety? It doesn’t really matter – the dog is one of the best parts of the series.

Bannister is great at presenting both characters of depth and interesting mysteries. She also excels at drawing emotional relationships between members of the opposite sex who are not romantic pairs.

China Roses is the eighth book in the Best and Ash series and it’s the best one since book four. Bannister tackles human trafficking and ups the tension between Hazel and Gabriel. There’s not enough of the dog Patience in the series – there never is – but we finally see a little more of Gabriel’s young sons. I highly recommend this series to lovers of police procedurals and all things British. The first book in the series is Deadly Virtues.

I read an advance reader copy of China Roses from Netgalley. It is scheduled to be published in early September, which gives you plenty of time to read the first seven books in the series!

China Roses will be available for checkout at the Galesburg Public Library after its release in September.