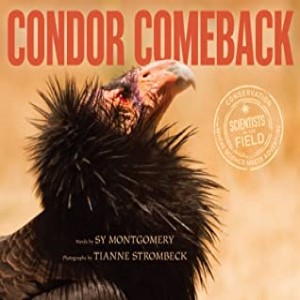 Sibert Medalist, National Book Award Honoree, and New York Times best-selling author Sy Montgomery turns her formidable talents to the story of California condors and the scientists who have fought against their extinction. In April of 1987 the last wild California condor was captured and taken to live in captivity like the other twenty-six remaining birds of its kind. Many thought that the days were over of this remarkable, distinguished bird that had roamed the skies of North and Central American for thousands of years.

Condor Comeback is a fantastic nonfiction book lavishly illustrated with photos by Tiannne Strombeck on almost every page. Part of the “Scientists in the Field” series, it details the story of the California condor, paying special attention to the last 50 years of decline. Where there were once 27 birds in human care, there are now over 400 condors in the wild and in zoos. Sy meticulously details what goes into saving a species and presents the information in a highly readable and captivating form. The two main factors impacting condor survival today are lead ammunition and microtrash. Addressing these two human issues is essential to the continued recovery of the species. The book profiles many of the researchers, zoo professionals, and other individuals who saved this species from extinction. Sy doesn’t shy away from death and its impacts on both individual animals and the species as a whole, so young and more sensitive readers should be aware. A map and timeline offer a visual perspective on the history of the species, and a bibliography and further sources section are included in the back.

Condor Comeback is a fascinating look at one of the largest flying birds in the world and is highly recommended for older animal-loving kids and adults of all ages. It was recently published and just came to Galesburg Public Library in November of 2020, so be sure to check it out! You can also check out Sy’s book Amazon Adventure: How Tiny Fish Are Saving the World’s Largest Rainforest, which just hit the Children’s Room shelf in June.

Condor Comeback is available for checkout at the Galesburg Public Library.