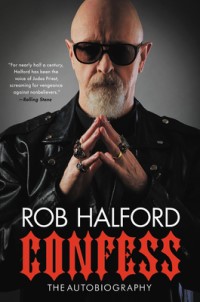 From the publisher: The legendary frontman of Judas Priest, one of the most successful heavy metal bands of all time, celebrates five decades of heavy metal in this tell-all memoir.

Confessis more than just a rock musician’s tell-all autobiography; it’s also the story of a gay man who remained closeted for decades, who feared what it would do to his career and his bandmates if word ever got out. It’s a story of how an inability to live his life openly led to repression, alcoholism, drug use, and a serious difficulty in finding stable relationships. And it’s also a musician’s tell-all autobiography.

I enjoyed seeing how Halford’s Black Country upbringing influenced not only his heavy metal sensibilities but his humble, unassuming demeanor as well. His conflict-averse personality and self-deprecating nature are things I can definitely relate to, and both come through strongly in his writing. Most telling was his story about how he accidentally quit Judas Priest through a misunderstanding, because he was misinformed about the process needed to start his side project band (which had the blessing of his bandmates), and then was too embarrassed and uncomfortable to say anything about it. I also found it very entertaining every time he recounted a story of meeting another musician, actor, or other celebrity and being surprised when they turned out to be as big a fan of him and his work as he was of theirs.

Halford’s (mis)adventures in the 1970’s and 80’s gay scenes, cruising for sex while trying to remain discreet, will probably shock some readers. It’s definitely an interesting window into what life on the road as a closeted gay man was like in that period, and the loneliness and frustration that Halford experienced during that period really comes through in his storytelling.

On the other hand, readers looking for juicy gossip and backstage drama might be a little disappointed in this book. Halford does mention a few stories, like the night he sang for Black Sabbath because then singer Ronnie James Dio refused to play as an opening act for Ozzy Osbourne. He also briefly discusses the departure of Judas Priest guitarist K.K. Downing from the band in 2011, but does so with understanding and compassion rather than casting blame.

Overall this was as much a memoir of a gay man growing up closeted as it was a rock star memoir, but I found it to be a satisfying read on both fronts. Any fan of heavy metal music should read Confess, and even those who have never heard a Judas Priest song in their lives might find Halford’s memoir an approachable and engaging read.

Confess is available at Galesburg Public Library in the nonfiction section.