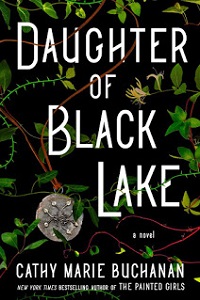 From the publisher: In a world of pagan traditions and deeply rooted love, a girl in jeopardy must save her family and community, in a transporting historical novel by nationally bestselling author Cathy Marie Buchanan.

It’s the season of Fallow, in the era of iron. In a northern misty bog surrounded by woodlands and wheat fields, a settlement lies far beyond the reach of the Romans invading hundreds of miles to the southeast. Here, life is simple–or so it seems to the tightly knit community. Sow. Reap. Honor Mother Earth, who will provide at harvest time. A girl named Devout comes of age, sweetly flirting with the young man she’s tilled alongside all her life, and envisions a future of love and abundance. Seventeen years later, though, the settlement is a changed place. Famine has brought struggle, and outsiders, with their foreign ways and military might, have arrived at the doorstep. For Devout’s young daughter, life is more troubled than her mother ever anticipated. But this girl has an extraordinary gift. As worlds collide and peril threatens, it will be up to her to save her family and community.

Daughter of Black Lake is a very nice piece of historical fiction with a little bit of magical realism. It’s set in first century AD Britain, against the backdrop of the invading Roman empire. It’s a time period I’m not very familiar with, and I was definitely taking breaks to look up Roman cities (other than Londinium, I know that one) to get an idea of the geography. The POV switches from Devout to her daughter Hobble frequently throughout the novel. While clearly labeled, it can be a bit disconcerting, and I found myself at times struggling with the shift, and this was in a sustained reading session without interruptions. Overall, I found this to be a well-written historical escape with good characterizations and captivating setting.

Daughter of Black Lake is available for checkout at the Galesburg Public Library via interlibrary loan.