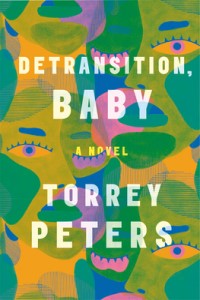 From the publisher: Reese almost had it all: a loving relationship with Amy, an apartment in New York City, a job she didn’t hate. She had scraped together what previous generations of trans women could only dream of: a life of mundane, bourgeois comforts. The only thing missing was a child. But then her girlfriend, Amy, detransitioned and became Ames, and everything fell apart. Now Reese is caught in a self-destructive pattern: avoiding her loneliness by sleeping with married men.

Ames isn’t happy either. He thought detransitioning to live as a man would make life easier, but that decision cost him his relationship with Reese—and losing her meant losing his only family. Even though their romance is over, he longs to find a way back to her. When Ames’s boss and lover, Katrina, reveals that she’s pregnant with his baby—and that she’s not sure whether she wants to keep it—Ames wonders if this is the chance he’s been waiting for. Could the three of them form some kind of unconventional family—and raise the baby together?

Torrey Peters doesn’t want people to consider her latest novel, Detransition Baby, a primer on trans lives. She told The Guardian that too many readers approach material like hers as homework, “with the well-meaning yet superficial goals of grasping concepts and burnishing credentials.” Peters, a trans woman, wrote Detransition, Baby for other trans women, “You never slow down to explain anything because trans women already know,” she told NPR.

Detransition, Baby tells the story of Reese, a trans woman who has always wanted to be a mother. Ames, Reese’s ex who spent six years living as Amy before making the decision to detransition to living as a man, calls Reese out of the blue with an opportunity. Ames has gotten his girlfriend Katrina pregnant, but Katrina doesn’t know about Ames’s past, and Ames isn’t sure parenthood as a man is something he is ready for. Ames suggests that the three of them parent the baby together, giving Reese the opportunity she’s always wanted and easing Ames’ uncertainty at his parenting abilities. When Katrina finds out about Ames, and his proposal to Reese, the three embark on a journey together that tackles parenthood, commitment, and personal identity.

In fact, parenthood is the main focus of Detransition, Baby. For Katrina, that concept is literal — is she ready to be a mother? Does she want to enter into motherhood in this unconventional situation? For Ames and Reese, the idea is more figurative. During a sit-down between the three characters, they discuss the lack of parental figures, specifically mothers, in the trans community to guide young trans-identifying people through life as a trans person. Meanwhile, Ames struggles with the idea of fatherhood. Despite deciding to detransition because life as a trans person was too difficult, he is unsure how he would identify as a parent.

Detransition, Baby isn’t without its flaws. Despite Peters’ insistence the book isn’t meant to simply educate non-trans readers, these conversations between Ames, Reese, and Katrina sometimes seem more like prepared lectures than realistic dialogue. Elsewhere, Peters brings up the topic of race almost superficially; there’s mention of Katrina being half-Asian, though it’s more in passing and not specifically related to the storyline, and Ames and Reese mention trans women of color facing even further struggles than they do as white individuals.

All of this could add up to an overly indulgent novel that reads more like thoughts from a soapbox than a compelling narrative, but Peters’ wit and connection to the community she writes about in Detransition, Baby a deeply riveting telling of life’s complications.