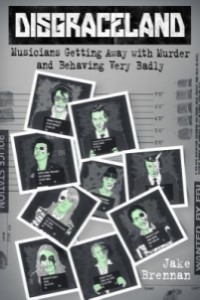 From the publisher: From the creator of the popular rock ‘n’ roll true crime podcast, Disgraceland comes an off-kilter, hysterical, at times macabre book of stories from the highly entertaining underbelly of music history.

Disgraceland (named after the author’s true crime podcast) is a collection of stories about musicians behaving badly and getting away with it, or at least not suffering any legal consequences. Many of these stories are famous ones that are pretty widely known, such as Jerry Lee Lewis marrying his 13-year-old cousin, or the black metal guy in Norway that murdered the other black metal guy as part of some sort of game of one-upmanship to prove who was more “evil,” a contest that also included arson, neo-Nazis, and cannibalism. However, there are also a few more obscure stories as well.

What sets this book apart from other rock star scandal books is the fanciful way in which the author describes the scenes, inventing the words that may have been spoken, the inner monologues that might have gone through their minds as they committed these acts, or in one case what another dead musician connected to them might have thought as they looked on from the afterlife. The last chapter is entirely made up, featuring an imagined scene of Elvis Presley on the day of his death, having an argument with an alternate version of himself: one who didn’t become a parody of himself, who didn’t follow a bunch of bad advice and fail to reach his full potential.

Unfortunately, this approach really didn’t work for me, as it made the book feel less like an authentic telling of true scandalous stories and more like celebrity fanfiction. Several of the stories also seemed to be pretty biased tellings of events. For example, the chapter on Sid Vicious of the Sex Pistols, whose short career ended abruptly when he was arrested for the murder of his girlfriend Nancy Spurgeon, and who died of a drug overdose some months later. This book portrays Sid as almost an innocent victim who was taken advantage of by the women in his life, first his mother and then Nancy, and who “never had a chance” and bears barely any responsibility for Nancy’s death even though he likely stabbed her. It also features a debunked story about Sid’s mother administering the fatal overdose that killed him, but presents it as the truth. The book does mention all of the sources it used for inspiration, but didn’t necessarily choose the best and most reliable sources available.

Between the fanciful embellishments of the truth and the reliance on a few questionable sources, what could have been an interesting study of the excesses of the celebrity music lifestyle read more like fiction. While the writing was fairly entertaining, I personally would have preferred that the author stick to the facts rather than using his imagination so much to write how things might have been.

Disgraceland is available for checkout from the Galesburg Public Library.