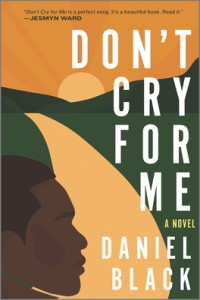 From the publisher: A Black father makes amends with his gay son through letters written on his deathbed in this wise and penetrating novel of empathy and forgiveness, for fans of Ta-Nehisi Coates, Robert Jones Jr. and Alice Walker.

Don’t Cry for Me is a sad, slow story told in a series of letters written by a man who is dying to his son. The history covered in the letters is very believable. The father insists that his son understand the family’s past, and visit the family land. He acknowledges how slavery has damaged them, and how Black people have learned to despise themselves instead of those who enslaved them. He tries to explain how expectations were different for straight adult men in the past, how he loved his son’s mother but why he was not a good father or husband. How he knows their broken relationship is his fault. How he wanted to say I love you out loud.

The author says, “When, in 2013, my father was diagnosed with Alzheimer’s, I knew what it meant – he’d soon forget what he’d done or said to me over the years. …For a long time, I had wanted us to hash things out, to speak honestly about how we had hurt or disappointed one another over the years. But Daddy’s mind left like a dream at dawn. And now the encounter could only happen in my imagination. So that was where I went. I saw, in my mind, my father leaning over a legal pad, writing, as best he could, something very private, very painful that couldn’t wait another day. …I wondered what he’d say if he could stare into my heart. This book is his response, his desperate plea.” It’s more accurate to say the book is the son’s desperate plea, to believe his father loved him as he was. It’s clear the text of the letters is wish fulfillment. I didn’t believe a man as presented would say the things he writes in his letters to his son. There is a small bit of magical realism that also didn’t work for me, and I thought the novel would have been stronger without it.

Although I had trouble believing the sentiments expressed by the father, they were sad and moving. Much of the writing is lovely and lyrical. But overall the book made me think of the famous last line from Hemingway’s The Sun Also Rises: “Isn’t it pretty to think so?”

I read an advance reader copy of Don’t Cry for Me from Netgalley. Although I felt this book was flawed, it is definitely worth a read, and others may find some comfort in the words.

Don’t Cry For Me is available for check out from the Galesburg Public Library in print and audio.