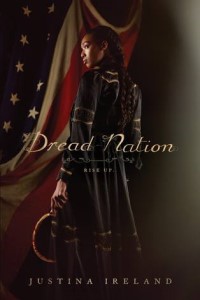 From the publisher: At once provocative, terrifying, and darkly subversive, Dread Nation is Justina Ireland’s stunning vision of an America both foreign and familiar—a country on the brink, at the explosive crossroads where race, humanity, and survival meet.

The Civil War was interrupted when the dead rose during the Battle of Gettysburg and hungrily attacked both armies. The Union and Confederacy soon realized they had to stop fighting each other and team up to defeat the shamblers, as they’re called in this book. The war was ended and slavery was outlawed (technically). But just like in the real world, racism and discrimination were alive and well.

Main character Jane McKeene was born 2 days before the dead rose, and as a teenager is drafted into a combat school for black girls. There she is taught to fight the dead using various weapons, though she dreams of returning home to her mother. Instead, she stumbles onto a scheme by the corrupt mayor of Baltimore and is shipped west to the Kansas frontier town of Summerland, along with her ex-boyfriend Jackson and her frenemy Katherine. Together, the three of them must try to survive the twin dangers of shamblers and racism, overcome the evil sheriff of Summerland, and escape to freedom.

At times, I found this difficult to read. The constant racism and abuse that Jane and the others endure is really hard to read about, especially because (other than the zombies) it’s a pretty accurate depiction of what things were like for African Americans at that time. It’s a lot to get through, but it’s worth it.

What I really liked about this book is that it works on multiple levels. On the surface, it’s an action-packed, drama-filled story with a smart protagonist and interesting, multi-dimensional supporting cast. But the writing is also smart and thought-provoking, with some subtle social commentary thrown in that doesn’t beat readers over the head with its message. Also, for those who prefer the audiobook version, Bahni Turpin gives an excellent performance.

Dread Nation is available for checkout from the Galesburg Public Library’s Young Adult collection and in audio form on Playaway.