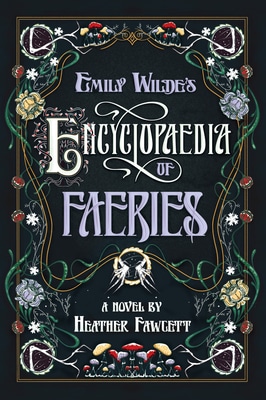 From the publisher: A curmudgeonly professor journeys to a small town in the far north to study faerie folklore and discovers dark fae magic, friendship, and love in the start of a heartwarming and enchanting new fantasy series.

Don’t let this book’s unwieldy and somewhat misleading title put you off – it’s a ton of fun. The story is written (mostly) as Emily Wilde’s journal, not as the encyclopaedia she is writing. She is a very serious-minded scholar who knows more about the fae than members of the fae themselves. She has worked very hard to be taken seriously as a researcher. The closest person she has to a friend is another scholar, named Wendell Bambleby, who is popular and charming but seems to sail through life with a minimum of work. She is both fond of him and mildly resentful of how easy things seem to be for him.

With her somewhat unnatural dog in tow, she travels to a remote Scandinavian village to investigate the fae of the north. She makes some big mistakes with the locals, as she understands the fae much better than she understands human beings. When Wendell arrives unexpectedly, it becomes clear to the reader but not Emily herself that Wendell’s interest in Emily is not just scholarly.

This book is not particularly original, but the author puts some nice twists of her own on the stories and legends of faerie. Some perilous things happen – as they do in all good fairy tales – but this is a book that left me in a good mood. The author really painted pictures for me of the various places (both real and magical) that Emily visits, and of the human townsfolk and the various magical creatures and people. I very much enjoyed the “it takes a village” mentality that is needed to bring all right in the world by the end. It’s okay to be both a capable independent woman and someone who has friends she can rely on.

This book reminded me of Genevieve Cogman’s Invisible Library series. It’s an entertaining romp that needn’t be taken too seriously. I’ve seen some indication that this is book one in a series, and I will look forward to book two.

I read an advance reader copy of Emily Wilde’s Encyclopaedia of Faeries. It is scheduled to be published on January 10, and the Galesburg Public Library will own it in multiple formats.