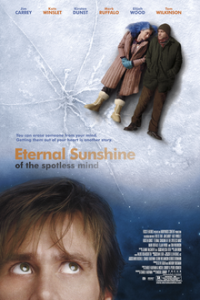 From the distributor: When their relationship turns sour, a couple undergoes a medical procedure to have each other erased from their memories.

Eternal Sunshine of the Spotless Mind (2004) tells the story of Joel Barish after he discovers his (now-ex) girlfriend Clementine has erased him from her memory. Devastated and confused, Joel decides to have the procedure himself, hoping that forgetting their time together will heal the wounds of her seeming betrayal. He visits Lacuna, the business that erases memories, and gives them everything he has that reminds him of Clementine: gifts, journal entries, things they bought together and shared, etc. Later, after Joel falls asleep, two Lacuna employees come into his apartment to begin the procedure. Ideally, they’ll take care of everything during the night and let him wake up refreshed and relieved of the memories he wished to escape.

However, Joel’s procedure is pretty quickly thrown off the rails when he starts to change his mind. As he lays asleep, the erasure process begins with his most recent memories of Clementine and works backward. As this happens, more happy and meaningful memories of their time together are revealed, and Joel realizes he doesn’t want to lose those moments forever. He wants the procedure to stop but doesn’t know how to tell the Lacuna goons. Clementine (at least, his mental projection of Clementine) senses his distress and tries to help by suggesting they hide in memories that have nothing to do with their relationship. They jump around Joel’s mind, making it hell for the Lacuna guys to finish the procedure, some of whom have their own pasts full of memories and feelings they’re trying to escape.

Joel is played by an unusually serious Jim Carrey, and Clementine Kruczynski by Kate Winslet. It’s odd seeing Carrey in this type of role, especially if you haven’t seen The Truman Show, but his performance makes it clear he’s not just a funnyman/butt-of-the-joke actor. Winslet scored her roll in this after starring in a series of period pieces, and she, too, shows that she can work well beyond the roles she’s typically type-cast in. Clementine is a spontaneous alcoholic with signs of mental illness, but I think she’s more relatable than many of us would like to think. At the very least we’ve probably all known someone that changes their hair color frequently and impulsively/on a whim. She says it best herself, “Too many guys think I’m a concept, or I complete them, or I’m gonna make them alive.”

Eternal Sunshine has developed a cult following in the 17 years since its release and also happens to be one of my personal favorites. There’s something really relatable (and heartbreaking) about a pain so deep that the only resolution you can think of is trying to forget it, and I appreciate this movie for making me realize how important memories can be, even when/if things ended poorly. 10/10 movie; I highly recommend it!

Eternal Sunshine of the Spotless Mind is available for checkout at the Galesburg Public Library.