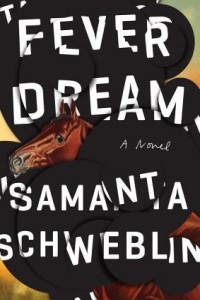 From the publisher: A young woman named Amanda lies dying in a rural hospital clinic. A boy named David sits beside her. She’s not his mother. He’s not her child. Together, they tell a haunting story of broken souls, toxins, and the power and desperation of family.

With a film adaptation releasing last week on Netflix, now is as good a time as any to (re)visit Samanta Schweblin’s 2017 novel Fever Dream, particularly given that we’re right smack dab in the middle of Spooky Season. Her concise but powerful work is indeed one of the creepier books to release in the past few years, if somewhat unconventionally so. It opens with a young mother named Amanda awakening in a clinic. She doesn’t know why she is there, she can’t see, she feels like worms are crawling all over and inside of her body, and she is being implored in whispered tones to “remember” and “go back to the beginning.” These directives come courtesy of David, the young son of Amanda’s friend Carla, and the novel proceeds to go back in time a short while, as Amanda attempts to recall recent events and articulate them to the young boy by her bedside. Amanda remembers that she has come to the countryside for a vacation with her young daughter Nina in tow, and it’s here that she meets Carla, David, and Omar, the family patriarch. The two women become fast friends, and Carla imparts to Amanda a story of David’s drinking poisoned water at three years old, being saved by a local woman with supernatural healing abilities, and how he has never been the same — and has to scare her — ever since.

To reveal much more would be to rob readers of the disorienting, mesmerizing experience of Schweblin’s novel, which affects a tenor of enigmatic, eerie horror without indulging any of the genre’s more garish elements like blood-letting or monster-making. Fever Dream rather falls into a similar category as John Darnielle’s novels, particularly Universal Harvester, mining terror from mystery and firmly rooting proceedings in a recognizable, almost banal reality that proves more than capable of unsettling readers through pure, expressive language — what could be more terrifying than a strange little kid purring “It’s happening. The worms. It’s a very bad thing.” There’s also a palpable claustrophobia that shrouds the tale, as are constantly reminded that this is a single-setting work, Amanda blind and unable to move on a bed, David perpetually warning her that they are almost out of time. But Fever Dream is more than a purely tonal exercise in dread; there’s also plenty of topical and metaphorical substance to buttress the story, including the ethics of pesticide use, depression and mental illness, and the lengths parents will go to protect their children (the novel’s original Spanish title is Distancia de rescate, which translates to The Rescue Distance, which indicates the proximity a parent must remain to their child in order to keep the safe). But while these elements do help add weight to this slim volume and present equally terrifying real-world implications, they ultimately play second fiddle to Schweblin’s mastery of mood and language, her novel one to be experienced rather than consumed, preferably in one sitting and in the dark. Adventurous readers up for a different kind of horror read this Halloween season will be well-rewarded if they look Fever Dream’s way.

Fever Dream is available for checkout from the Galesburg Public Library.