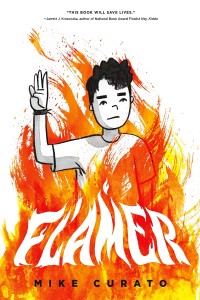 From the publisher: Award-winning author and artist Mike Curato draws on his own experiences in Flamer, his debut graphic novel, telling a difficult story with humor, compassion, and love.

Aiden is away at summer camp, which is a blessed relief from his parents’ constant fighting and his fears about starting high school in the fall. Camp has some challenges of its own though: Aiden deals with bullies, as well as confronting his changing and confusing feelings for his close friend Elias. Set in the mid-1990s when being “gay” was regularly used as an insult rather than being widely accepted as a normal sexual orientation, Flamer draws from the author’s own experiences to craft a powerful coming-of-age story that perfectly captures the struggles with self-acceptance and fear of coming out that many teens go through.

Empathizing with and rooting for Aiden is quite easy — he’s a well-defined and effortlessly likeable character in a pretty relatable situation. While it might be hard to believe that Aiden remains oblivious to his crush on Elias for as long as he does, I found him charmingly naïve rather than getting frustrated at him for being dense. Even readers who have never struggled with questions of sexual identity should have no trouble relating to Aiden’s situation. And those who have been through similar experiences will feel seen in a way that few other stories can accomplish.

The art on display is also very impressive. It’s mostly drawn in black and white, but occasionally employs reds and oranges to highlight certain things in a scene, such as campfires, blood, and dream sequences.

Flamer is available for checkout at the Galesburg Public Library.