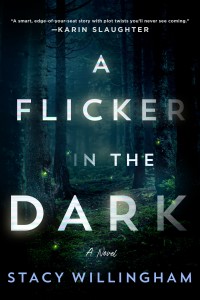 From the publisher: When Chloe Davis was twelve, six teenage girls went missing in her small Louisiana town. By the end of the summer, her own father had confessed to the crimes and was put away for life, leaving Chloe and the rest of her family to grapple with the truth and try to move forward while dealing with the aftermath. Now twenty years later, Chloe is a psychologist in Baton Rouge and getting ready for her wedding. While she finally has a fragile grasp on the happiness she’s worked so hard to achieve, she sometimes feels as out of control of her own life as the troubled teens who are her patients. So when a local teenage girl goes missing, and then another, that terrifying summer comes crashing back. Is she paranoid, seeing parallels from her past that aren’t actually there, or for the second time in her life, is Chloe about to unmask a killer?

I’ve been reading a lot of psychological thrillers lately, and A Flicker in the Dark is a good one. Actress Emma Stone’s production company plans to produce it as limited HBO Max series. Chapter one starts with narrator Chloe Davis in her office with a patient. By chapter two she is ordering a prescription refill for her fiancé – a prescription he knows nothing about and that she uses herself. As soon as I read that, I knew that Chloe was going to make some questionable decisions, and I was right.

Chloe has issues. Many, many issues. Not surprising, with her father in prison for murdering six teenaged girls and her mother in a home after a botched suicide attempt. Chloe found the evidence that got her father convicted. Chloe admired and was friends with one of the victims. None of the victims were ever found. Chloe’s overprotective brother doesn’t like her fiancé Daniel. And Chloe is a little too fond of that stash of prescription drugs she keeps close at hand.

I found A Flicker in the Dark compulsively readable. Even though I figured out the Big Reveal early on – there were some additional twists, but I was right – it did not affect my enjoyment of the story. Chloe is a mess who is just hanging on, and I think this novel was particularly enjoyable during a pandemic, when many of us feel like we are just hanging on. She makes mistakes. Her reasoning is often flawed. But she copes. She carries on.

My only real disappointment is that I expected more from and about the father than I got, but that’s a minor quibble. A Flicker in the Dark is a definite recommend from me for fans of psychological thrillers, and I look forward to future titles from this debut author. I read an advance reader copy from Netgalley.