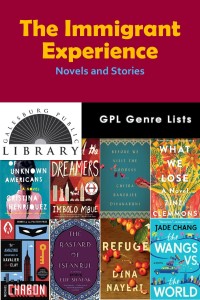 Need some help choosing your next book to read? We’ve put together some lists of popular titles in different genres to help you pick! Each Wednesday we’ll highlight a new genre list. This week, we’re highlighting the Immigrant Experience genre list, but if you’re looking for something different, visit the Readers Advisory page for more help! 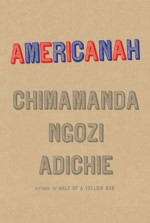 Ifemelu and Obinze are young and in love when they depart military-ruled Nigeria for the West. Beautiful, self-assured Ifemelu heads for America, where despite her academic success, she is forced to grapple with what it means to be black for the first time. Quiet, thoughtful Obinze had hoped to join her, but with post-9/11 America closed to him, he instead plunges into a dangerous, undocumented life in London. Fifteen years later, they reunite in a newly democratic Nigeria, and reignite their passion—for each other and for their homeland. 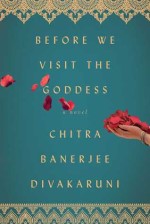 BEFORE WE VISIT THE GODDESS by Chitra Banerjee Divakaruni

The daughter of a poor baker in rural Bengal, India, Sabitri yearns to get an education, but her family’s situation means college is an impossible dream. Then an influential woman from Kolkata takes Sabitri under her wing, but her generosity soon proves dangerous after the girl makes a single, unforgivable misstep. Years later, Sabitri’s own daughter, Bela, haunted by her mother’s choices, flees abroad with her political refugee lover—but the America she finds is vastly different from the country she’d imagined. As the marriage crumbles and Bela is forced to forge her own path, she unwittingly imprints her own child, Tara, with indelible lessons about freedom, heartbreak, and loyalty that will take a lifetime to unravel. 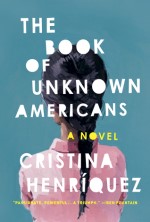 THE BOOK OF UNKNOWN AMERICANS by Cristina Henriquez

After their daughter Maribel suffers a near-fatal accident, the Riveras leave México and come to America. But upon settling at Redwood Apartments, a two-story cinderblock complex just off a highway in Delaware, they discover that Maribel’s recovery–the piece of the American Dream on which they’ve pinned all their hopes–will not be easy. Every task seems to confront them with language, racial, and cultural obstacles.

At Redwood also lives Mayor Toro, a high school sophomore whose family arrived from Panamá fifteen years ago. Mayor sees in Maribel something others do not: that beyond her lovely face, and beneath the damage she’s sustained, is a gentle, funny, and wise spirit. But as the two grow closer, violence casts a shadow over all their futures in America. 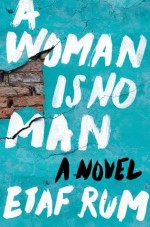 A WOMAN IS NO MAN by Etaf Rum

In Brooklyn, eighteen-year-old Deya is starting to meet with suitors. Though she doesn’t want to get married, her grandparents give her no choice. History is repeating itself: Deya’s mother, Isra, also had no choice when she left Palestine as a teenager to marry Adam. Though Deya was raised to believe her parents died in a car accident, a secret note from a mysterious, yet familiar-looking woman makes Deya question everything she was told about her past. As the narrative alternates between the lives of Deya and Isra, she begins to understand the dark, complex secrets behind her community. 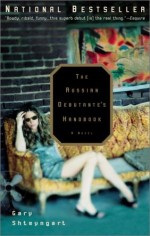 The Russian Debutante’s Handbook introduces Vladimir Girshkin, one of the most original and unlikely heroes of recent times. The twenty-five-year-old unhappy lover to a fat dungeon mistress, affectionately nicknamed “Little Failure” by his high-achieving mother, Vladimir toils his days away as a lowly clerk at the bureaucratic Emma Lazarus Immigrant Absorption Society. When a wealthy but psychotic old Russian war hero appears, Vladimir embarks on an adventure of unrelenting lunacy that takes us from New York’s Lower East Side to the hip frontier wilderness of Prava–the Eastern European Paris of the nineties. With the help of a murderous but fun-loving Russian mafioso, Vladimir infiltrates the Prava expat community and launches a scheme as ridiculous as it is brilliant. 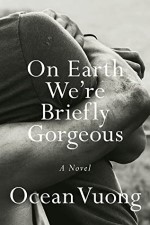 On Earth We’re Briefly Gorgeous is a letter from a son to a mother who cannot read. Written when the speaker, Little Dog, is in his late twenties, the letter unearths a family’s history that began before he was born — a history whose epicenter is rooted in Vietnam — and serves as a doorway into parts of his life his mother has never known, all of it leading to an unforgettable revelation. At once a witness to the fraught yet undeniable love between a single mother and her son, it is also a brutally honest exploration of race, class, and masculinity. Asking questions central to our American moment, immersed as we are in addiction, violence, and trauma, but undergirded by compassion and tenderness, On Earth We’re Briefly Gorgeous is as much about the power of telling one’s own story as it is about the obliterating silence of not being heard.

View more from the Immigrant Experience genre list, or see other genre lists we have available.