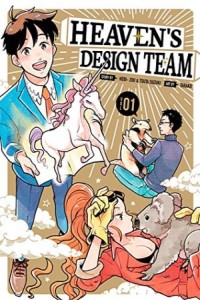 From the publisher: God created the heavens and the Earth — but, little-known fact, he outsourced the animals to the office of Heaven’s Design Team! This hilarious and educational manga features weird real-life animals and puts even some humdrum critters in a strange new light.

THIS ISN’T YOUR AVERAGE DESIGN AGENCY!

Heaven’s Design Team has kind of a wacky premise – what if instead of creating all the various animals on Earth, God hired a design firm to come up with creatures based on his guidelines and then submit them for approval? The result is a humorous, educational, enjoyable, but ultimately not very deep reading experience.

Shimoda, an angel acting as liaison between God and the design team, meets the designers:

Sometimes the designers compete with each other, as when Pluto and Neptune keep designing new upgrades for squids and dolphins to outdo one another. Other times they collaborate, like when God requests an animal with an “impressive weapon” and everyone tries to fix design flaws for Saturn’s unicorn (which eventually fails, but Neptune uses the horn to make a narwhal).

The first volume has 7 chapters, each of which covers a separate design request. It’s a quick read, and the chapters make it easy to pick up and put down. However, the downside is that the story isn’t very deep thanks to the short, episodic nature of the scenes.

After each chapter there’s a section with real pictures of the animals and describing some of their unusual features, which gives an educational aspect to the manga. This education/entertainment mix may seem like something appropriate for kids, but there are some elements that are not kid-friendly. For example, sometimes animals’ sexual characteristics are discussed (such as when Pluto designs the acorn barnacle to have a lengthy, extendable sexual organ), putting this firmly in the PG-13 category.

Overall, Heaven’s Design Team is a funny, light read that’s appropriate for teens and up.

Heaven’s Design Team is available for checkout from the Galesburg Public Library.