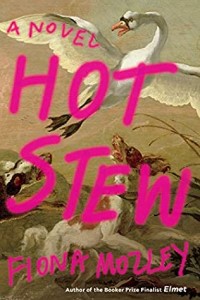 From the publisher: London has changed a lot over the years. The Soho that Precious and Tabitha live and work in is barely recognisable anymore. And now, the building they call their home is under threat; its billionaire-owner Agatha wants to kick the women out to build expensive restaurants and luxury flats. Men like Robert, who visit the brothel, will have to go elsewhere. The collection of vagabonds and strays in the basement will have to find somewhere else to live. But the women are not going to go quietly. They have plans to make things difficult for Agatha but she isn’t taking no for an answer.

Fiona Mozley writes with a voice that feels like the consistency of cornstarch and water–you know, if you poke at it too fast it’s like hitting concrete, but if you ever-so-gently dip into it, it flows through your fingers. Her descriptions are incredibly rich and unique, which is mostly the reason I finished this book. Many of the characters feel barely two-dimensional at times, which turns this read into a real trudge, considering the story is propelled by a web of relationships rather than a strong plot.

Tabitha and Precious are sex workers in a brothel (a “stew,” as it was called in the past) where they’re paid well and treated even better. We hear several times about how happy they are in their work and their lack of pimps. Their clients would literally die for them. It’s virtually utopic, other than the fact that rich monster Agatha is trying her hardest to empty the building out so she can class up Soho.

Interjection! Bastian and a few other peripheral characters appear every once in a while–characters who seem to add no value to the story whatsoever. (And this interjection is exactly how their appearances feel in the book.)

Sidenote about peripheral characters: Lorenzo is an actor in a show that sounds suspiciously like Game of Thrones, and I found it interesting that the only sexual violence in the book comes from a fictional TV show.

While Agatha is such a villain that even her own dog doesn’t like her, there are more lovable characters who are addicts and ex-cons. The most fleshed-out character like this is Robert, who used to have a thriving career in violence. Nowadays he frequents the pub and brothel, often giving a little money to one of the homeless women living in the basement. When she goes missing, he’s absolutely beside himself. When the women of the brothel fight back against corrupt police, Robert will do anything to help them. That’s great, but… do you see how this book about women’s place in society almost gives more life to its male characters? I guess maybe that’s intentional.

Maybe this book was just too smart for me and I didn’t “get it.” It really is technically a “good” book. If you enjoy philosophizing, thinking about issues of class and gender, or dipping into multiple characters’ lives rather than diving into just a few, you should give this one a try.