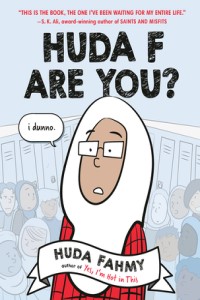 From the publisher: From the creator of Yes, I’m Hot In This, this cheeky, hilarious, and honest graphic novel asks the question everyone has to figure out for themselves: Who are you?

In this fictionalized autobiography, Huda Fahmy gives a charming, funny portrayal of what it was like growing up as a hijab-wearing Muslim girl in America and figuring out just who she is and wants to be. In case the punny title didn’t make it clear, the author is not afraid to crack jokes at her own expense (though according to the book’s dedication, her mom hates the title).

Huda was always “the hijab girl” growing up, but once her family moved to Dearborn, Michigan (home of the largest per-capita Muslim population in the United States), that was no longer enough to set her apart. She tries fitting into several different groups of people, trying to figure out how to define herself, with often humorous results. In many ways this is a typical story of a relatable teen growing up. Huda deals with some common problems every teen faces such as acne, awkwardly trying to talk to the boy she likes, and surviving the day-to-day life of a high schooler. But then there’s also teachers who struggle to pronounce her name, parents who demand perfection, strict religious studies classes, and of course racism.

I found Huda a very relatable and pleasant character, and it definitely helps that she doesn’t take herself too seriously. The art style is simple and cartoony, yet charming and fairly distinctive. It makes for a quick, fun read that I could definitely see myself picking up again in the future.

Huda F Are You? is available at Galesburg Public Library in our graphic novel collection.