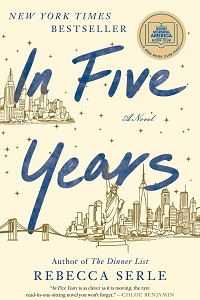 From the publisher: Where do you see yourself in five years?

Dannie Kohan lives her life by the numbers. She is nothing like her lifelong best friend—the wild, whimsical, believes-in-fate Bella. Her meticulous planning seems to have paid off after she nails the most important job interview of her career and accepts her boyfriend’s marriage proposal in one fell swoop, falling asleep completely content.

But when she awakens, she’s suddenly in a different apartment, with a different ring on her finger, and beside a very different man. Dannie spends one hour exactly five years in the future before she wakes again in her own home on the brink of midnight—but it is one hour she cannot shake. In Five Years is an unforgettable love story, but it is not the one you’re expecting.

In Five Years is a beautiful story of love and friendship. Main character Dannie is incredibly Type A and has her perfect life all mapped out. On the same day she nails a job interview for a prestigious NYC law firm, she gets engaged to her boyfriend David, and everything looks like it’s going as planned. But fast forward four and a half years, Dannie and David are still not married when the man from her “dream” walks into their lives in the form of Dannie’s best friend, Bella’s, boyfriend. This sends Dannie into a tailspin that threatens to derail everything she’s worked for.

Even though the book deals with some heavy topics, Serle still manages to keep it lighthearted and sweet. This is the perfect read for a winter day in the middle of a pandemic. It is especially perfect for anyone who has COVID-brain and feels like they can’t concentrate on anything for longer than 15 minutes right now. That has been me for the past 9 months, which has made reading a chore. But I read two thirds of In Five Years in one sitting. I could not put it down.

It’s hard to explain why I liked this book so much without giving away the twists and the ending. The main love story is, indeed, not the one you’re expecting, but it’s just the one I needed to read about right now, and that love story was my favorite part of the book. Also, even though it’s billed as “romance”, the book also has a mystery element, with the twists that occur for everyone throughout the book, and a bit of a fantasy/science fiction element, with Dannie’s “dream” of the future. I enjoyed the genre-blending and think it helped make the book a page-turner.

I loved Dannie and Bella’s relationship. It’s good to see strong female friendships, and this definitely had that. Dannie and Bella have been there for each other through everything since they were children, and there is A LOT that they have stuck by the other through. Check this out if you’re looking for a story about empowering, enduring friendships.

There’s not much I didn’t like about this book. I don’t normally like stories that have sad endings, or even worse, incomplete or abrupt endings. But while In Five Years sort of has both of those, I actually loved the ending. It wraps up just enough to leave you satisfied and feeling very hopeful. There are a few secondary characters that I wish were more fleshed out. Dannie’s parents, for example, are talked about frequently but we get very little information or actual interaction with them. I think some more background or interaction with a few of these characters would have helped make the story and atmosphere stronger, but that is a minor critique. Overall, this is a great book if you’re looking for a fast read that is uplifting and captivating.

In Five Years is available for checkout at the Galesburg Public Library. It is also available as an ebook or audiobook via Axis 360.