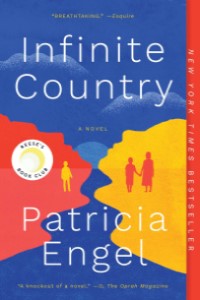 From the publisher: I often wonder if we are living the wrong life in the wrong country.

Talia is being held at a correctional facility for adolescent girls in the forested mountains of Colombia after committing an impulsive act of violence that may or may not have been warranted. She urgently needs to get out and get back home to Bogotá, where her father and a plane ticket to the United States are waiting for her. If she misses her flight, she might also miss her chance to finally be reunited with her family.

How this family came to occupy two different countries, two different worlds, comes into focus like twists of a kaleidoscope. We see Talia’s parents, Mauro and Elena, fall in love in a market stall as teenagers against a backdrop of civil war and social unrest. We see them leave Bogotá with their firstborn, Karina, in pursuit of safety and opportunity in the United States on a temporary visa, and we see the births of two more children, Nando and Talia, on American soil. We witness the decisions and indecisions that lead to Mauro’s deportation and the family’s splintering—the costs they’ve all been living with ever since.

Fresh off a New American Voices Award win and inclusion in the NEA’s roster of 2022-2023 Big Read titles (as well as an official Reese’s Book Club selection, if that’s more your speed), Patricia Engel’s Infinite Country is a slim but emotionally potent novel tackling such essential and timely issues as immigration, systemic racism, failures of the American social safety net, and the complications of family. There are certainly issues at play in the novel, but it’s also a character-dominant work. It opens with 15-year-old Talia escaping from a nun-governed reform school in the Colombian mountains, following her as she makes her way back to Bogota where she intends to board a flight to the U.S. in order to reunite with her mother (and, as a result, leave her father). Infinite Country then proceeds to fold backward in time, to when Talia’s parents Mauro and Elena first met, tracing their young lives immigrating to the U.S., bearing two other children, and facing all manner of hardship.

Engel builds fluidity into her chronology, allowing her narrative to pirouette at will, easily sliding between past and present, U.S. and Colombia, hope and despair. This approach to storytelling leads to the novel’s most notable deviation from literary norms: where typical tales of family, particularly ones that are decades-long in the telling, find moments to sit in, opportunities to slow down and sketch elaborate scenes, Infinite Country plays as if on fast-forward. There is very little to the novel that doesn’t feel like an abridgment — and, indeed, the proceedings are at a point shown to be the recollections of one of Talia’s siblings — but it’s frequently to the novel’s credit. Engel challenges readers’ expectations of narrative, short-circuits the way we are taught to read such works, while never sacrificing emotional weight or empathic portraiture. The fact is, there is little actual story here relative to novels of similar themes and shapes, but the impression upon finishing is of something much grander, which is a testament to Engel’s writerly skill and facility at narrative construction.

It’s not all roses, though. The downside to Engel’s approach is that she doesn’t always drill down enough into either her characters or cultural rhetoric. It’s true that there’s a sweeping emotional tenor that pervades Infinite Country, but individual tragedies and setbacks don’t quite register with the oomph you’d expect, as characters are given limited space and plumbed only shallowly across the short 200 pages. More disappointing is that in rushing through 20+ years in the lives of this family, much of Engel’s noodling about the respective moral rot of the U.S. and Colombia and her presentation of immigration-specific hardships comes off as trope-heavy, mining headlines and political discourse for fodder without much deepening it. That’s not to say any of this is generic, as Infinite Country has its own unique character, whether in spite of or because of its innately limiting narrative trappings. But this almost laidback quality sets up a pro-con dichotomy: at its best, Infinite Country is unique, moving, ethereal; at its worst, it feels only three-quarters cooked, leaving readers at a bit of a remove from its rich humanist core.

Infinite Country is available for checkout from the Galesburg Public Library.