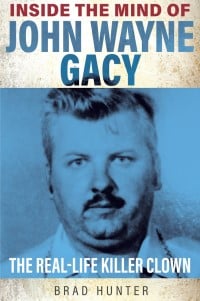 From the publisher: Brad Hunter has spent over thirty years writing about some of America’s most horrific crimes. In this new book he enters the mind of John Wayne Gacy, the real-life Killer Clown, often said to be the inspiration for Stephen King’s evil Pennywise in It. Drawing on his many years’ experience investigating and interviewing perpetrators of terrible crimes, Hunter seeks to understand what drove Gacy to unleash a reign of terror in suburban Chicago.

Yes, I really am reviewing the second book on John Wayne Gacy in less than year. I was a senior in a suburban Chicago high school when the John Wayne Gacy story broke. I have strong memories of watching the news each night, hearing the body count rise, and then discussing the case with my classmates at school the next day. We were around the same age as many of the victims, and it was chilling. Although I’ve read a number of books about Gacy, I feel compelled to read any new books that are published.

Inside the Mind of John Wayne Gacy focuses much more on Gacy than did Boys Enter the House by David B. Nelson, which I reviewed in 2021. I didn’t learn anything new, and yet somehow reading about the victims makes me feel at least I can do that much for them. The case is still active since five victims remain unnamed. Three victims have been identified since 2011, including Francis Wayne Alexander in October 2021.

At times this book felt more like an article written for a sensationalistic rag. The author constantly used new terms to describe Gacy. At first I found this odd and distracting but I got used to it. Descriptive terms included “corpulent killer,” “nondescript businessman,” “rotund contractor,” and “apex predator.”

The author makes you understand that Gacy really thought he could get away with his behavior – not just at the beginning, but at the end. Taking teenager Robert Piest from his workplace could have been a plea to get caught, but that doesn’t seem to be the case. Gacy really thought his brains and reputation with cops and politicians would get him off the hook once again. Fortunately, he was wrong.

This book will appeal to those who remember the Gacy case and would like to know more about the victims. If you are as fascinated by the case as I am, you will want to read Inside the Mind of John Wayne Gacy, which will be available for checkout from the Galesburg Public Library.