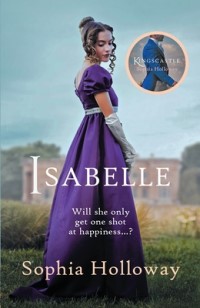 From the publisher: Isabelle Wareham, whilst caring for her beloved widowed father, has not seen much of the world. After his death, Isabelle finds she is no longer her own mistress but under the guardianship of her unscrupulous brother-in-law, Lord Dunsfold, who sees her as a way to improve his own fortunes. The outlook looks bleak until events throw Isabelle and the impoverished Earl of Idsworth together. However, Dunsfold is determined to force her into a more lucrative match and Isabelle will need to rise above her circumstances to reach her chance of happiness.

Our heroine is Isabelle, recently orphaned and with a sister who might as well be a fairy tale stepsister, she is so resentful of Isabelle. For four years, Isabelle and her father’s faithful valet have assisted her ailing Papa and managed the estate as he declined. Now he is dead, and he had the gall (according to her sister and brother-in-law) to leave his estate to Isabelle. Fortunately, Isabelle has a good-natured cousin to protect her from the dastardly pair and from the patronizing suitor who feels certain she will marry him given enough time.

Isabelle’s father always hosted the Boxing Day hunt, and she eagerly agrees to host without him, to give her something to think about other than her grief. An unfortunate shooting accident leaves Isabelle with an unexpected houseguest. Isabelle moves a little slowly for a stretch, when Isabelle is nursing the gravely injured Earl of Idsworth. However, it turns into a cracking good time. There are plot twists and kidnappings, carriage chases and heartfelt romance.

The author has written many lovely, old-fashioned passages that I quite enjoyed, like this one: “This was England, and he loved it. Fighting through the Iberian Peninsula had taught him to appreciate the verdure of his native country, even in the grey-green drabness of winter; the smell of damp woods with the leaf litter of beech, oak, and ash; the dark, ploughed loam ready to nurture the next year’s harvest. Only by being effectively exiled from it had he come to realise how much it meant to him.” (p. 76)

I read an advance reader copy of Isabelle from Netgalley, courtesy of Allison & Busby. The book is scheduled to be published on December 15, and the Galesburg Public Library will own it.