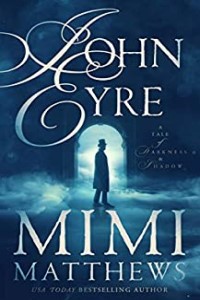 From the publisher:  Yorkshire, 1843. When disgraced former schoolmaster John Eyre arrives at Thornfield Hall to take up a position as tutor to two peculiar young boys, he enters a world unlike any he’s ever known. Darkness abounds, punctuated by odd bumps in the night, strange creatures on the moor, and a sinister silver mist that never seems to dissipate. And at the center of it all, John’s new employer Bertha — a widow as alluring as she is mysterious. John and Bertha contend with secrets, danger, and the eternal struggle between light and darkness. Can they help each other vanquish the demons of the past? Or are some evils simply too powerful to conquer?

John Eyre is a mash-up retelling of Jane Eyre and another classic novel (I won’t say which, as the name of this second novel is a spoiler for John Eyre‘s story). I read Jane Eyre a million years ago and have never read the second book, so don’t look to my review for whether John Eyre as a reworking of the pair does them justice. I didn’t like Jane Eyre and remember almost nothing about it. I read this book because I’m a huge fan of Mimi Matthews and will read anything she writes. If you want to be surprised, don’t read too much about this book — the name of the second novel is spoiled in numerous quotations about the book that I’ve seen.

I did enjoy the gothic spookiness of John Eyre. The book includes flashbacks to Bertha Rochester’s marriage, and it is pretty obvious from early on the nature of Mr. Rochester’s secret. But there are mysteries about Mrs. Rochester and the boys. Mrs. Rochester and John Eyre don’t quite fall in insta-love, but they aren’t far from it. They hardly see each other or talk before they spring into attraction and devotion. Bertha was a little too tortured and John a little too ready to fall under her spell, and I didn’t find either character especially compelling.

Still, Mimi Matthews is a good writer and overall John Eyre was a fun read. I especially liked tutor John Eyre’s relationship with his young charges. I appreciated the Victorian touches throughout the text, and knowing the author I’m sure the historical details were well researched. The story is nicely atmospheric:

“It was a chill January evening. The earth was damp beneath his booted feet, and the air was still. There was no one else about on the narrow country road. None he could see moving through the mists that gathered over the ground and along the trees. As he walked, twilight approached, lending an air of magic to the bleak winter landscape. He was but a mile from Thornfield in a lonely lane, the chief pleasure of which lay in its utter solitude. It led all the way to Hay at a slow incline, flanked by leafless trees and empty fields.” (p. 46 of the advance reader copy)

If you enjoy clean historical romance, I recommend John Eyre and the author’s other works. I read an advance reader copy of John Eyre from Netgalley.

John Eyre will be released on July 20. It will be available for checkout from the Galesburg Public Library, and available as an ebook.