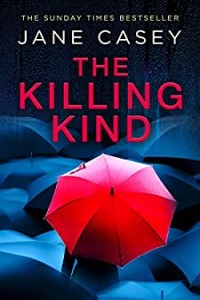 From the publisher: As a barrister, Ingrid Lewis is used to dealing with tricky clients, but no one has ever come close to John Webster. After Ingrid defended Webster against a stalking charge, he then turned on her — following her, ruining her relationship, even destroying her home. Now, Ingrid believes she has finally escaped his clutches. But when one of her colleagues is run down on a busy London road, Ingrid is sure she was the intended victim. And then Webster shows up at her door. Webster claims Ingrid is in danger — and that only he can protect her.

Jane Casey writes a police procedural series about a detective named Maeve Kerrigan that I love. I was disappointed when I found out that Casey’s new book would be a standalone, but I was not at all disappointed by the book itself. The Killing Kind is the best psychological thriller I’ve read since Gone Girl. I’m a Law & Order fan, and Casey has been covering the police side of things; in this book, she covers the courtroom side.

The narrator of The Killing Kind is a barrister named Ingrid Lewis, and she is the star around which three compelling men circle: John Webster, the man she successfully defended against a stalking charge, who then turned his attentions to Ingrid; Adam Nash, the intense cop who was unhappy that Ingrid got Webster off; and Mark Orpen, Ingrid’s cheating ex-fiancé, who was as negatively affected by the aftermath of the Webster trial as Ingrid. Who can she trust? All of them? Any of them?

And what about Ingrid? Why do we keep finding out things about her that cast her in a bad light? Is she a reliable narrator? Is she imagining some of the things that she says are happening? The people around her — her nosy neighbor, her best friend, that guy she keeps running into — are they innocent bystanders or up to something? Is Ingrid paranoid or in extreme danger?

Casey does a great job of drawing strong and believable characters and of ratcheting up the tension. I actually set the book aside a couple of times when I wasn’t sure if I wanted to know what happened next – but I did, so I picked it back up again.

At times, I had to suspend my disbelief a bit. There are multiple “too stupid to live” moments, and one character’s ability to enter any home without leaving signs and to find out information about any person strained credulity. But Casey is an amazing writer, and I was happy to let her sweep me along. I guessed some twists, but I definitely did not guess them all.

I read an advance reader copy of The Killing Kind from Netgalley. The novel is due out in print in the United States in September 2021. The library currently owns the complete Maeve Kerrigan series. The first book in the series is The Burning.

The Killing Kind will be available for checkout at the Galesburg Public Library when it releases in September. It is currently available as an ebook through Libby.