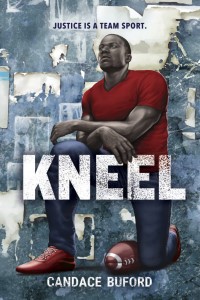 From the publisher: The system is rigged. For guys like Russell Boudreaux, football is the only way out of their small town. As the team’s varsity tight end, Rus has a singular goal: to get a scholarship and play on the national stage. But when his best friend is unfairly arrested and kicked off the team, Rus faces an impossible choice: speak up or live in fear. “Please rise for the national anthem.” Desperate for change, Rus kneels during the national anthem. In one instant, he falls from local stardom and becomes a target for hatred. But he’s not alone. With the help of his best friend and an unlikely ally, Rus will fight for his dreams, and for justice.

Kneel is exactly what I expected from a book about a Black high school football player in Louisiana who kneels during the national anthem after his best friend is falsely accused of starting a fight with a White rival player. Kneel is a compelling novel for our times written from the point of view of a Black male teenager, but there were no surprises. Main character and narrator Rus is impulsive, loyal, and a good son in addition to being a good football player. His parents have scrounged and saved in hopes that Rus will have better opportunities than they had. Before a game with a White high school, two White players provoke a fight, but it’s the two Black players who are blamed and punished.

I feel like I read a lot of books narrated by girls, so it was a nice change to read one narrated by a boy. The book opens with what should be a perfectly normal situation – car problems and a breakdown – that feels terrifying when seen from the point of view of two Black teenagers on the border of the White and Black parts of town. While football is important in the book, there is not a lot of focus on it, so if you aren’t a fan it should not impair your enjoyment and understanding of the book.

I felt a romantic side plot was unnecessary and a bit of a distraction. The ending, while overly optimistic, is a satisfactory one for the reader. In chapter 22, at a rally, a speaker calls out the names of two Black men killed by police. I was surprised that the circumstances were very similar to real life incidents but real names were not used. I wonder what was behind that decision. I found it confusing.

This novel brings together issues of Black Lives Matter, policing, justice, racism, and White silence, along with how social media and video have become so important in spotlighting the truth.  The book is very earnest in its desire to convey these issues to the reader. It lacks the maturity and brilliance of The Hate U Give, but readers who enjoyed that book might also like to read Kneel. The last few chapters are the most compelling, with Chapter 29 being the strongest part of the book in my opinion.

Kneel is a good choice for young adults and for public library young adult fiction collections.  I read an advance reader copy.

Kneel is available for checkout at the Galesburg Public Library in the Young Adult section.