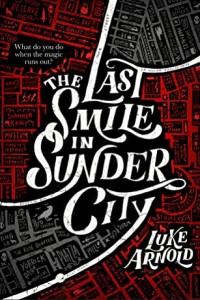 From the publisher: In a world that’s lost its magic, a former soldier turned PI solves cases for the fantasy creatures whose lives he ruined in an imaginative debut fantasy. Welcome to Sunder City. The magic is gone but the monsters remain.

The Last Smile in Sunder City by Australian actor Luke Arnold treads some familiar territory. It reminded me of Shrek, of Ever After High, of Who Framed Roger Rabbit. Humans managed to destroy all the magic in the world, and main character Fetch Phillips, a human, is trying to work off his guilt. Vampires, werewolves, elves, gnomes, and all other manner of magical creatures now mingle and try to live without what made them special.

Fetch was raised in a walled, nonmagical city of humans. He didn’t realize the wonders of the world until he left the city and struck out on his own. Fetch is the stereotyped cynical, world-weary private eye down to the last degree. He can take a beating and fully expects to when he wanders into shady bars seeking answers. In fact, his guilt makes him almost welcome the pain. His friends are few. An old injury causes him chronic pain, so he self-medicates and is usually high, drunk, or both.

This book does not take itself seriously. There are no messages to puzzle over. It’s just a fun romp through tropes we know and love. In this first book in the series, Fetch is hired by a school principal to find a missing vampire, an ancient and beloved teacher at the school. As we follow Fetch around Sunder City as he seeks clues, he spins out his backstory and the backstory of the missing magic. We learn about the woman he loved, and how he received each of his four tattoos. (I found the tattoo stories the most effective and interesting part of the narrative.)

The Last Smile in Sunder City isn’t going to win any awards, but I can definitely imagine it being made into a TV or movie series (perhaps starring its actor author). The second book, Dead Man in a Ditch, came out in 2020, and the third book is due out in 2022. The Galesburg Public Library owns the first two books in print and as ebooks, and the first book as an audiobook on Playaway.

The Last Smile in Sunder City is available for checkout from the Galesburg Public Library.