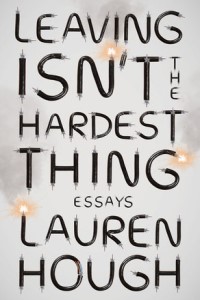 From the publisher: As an adult, Lauren Hough has had many identities: an airman in the U.S. Air Force, a cable guy, a bouncer at a gay club. As a child, however, she had none. Growing up as a member of the infamous cult The Children of God, Hough had her own self robbed from her. The cult took her all over the globe — to Germany, Japan, Texas, Ecuador — but it wasn’t until her mother finally walked away that Lauren understood she could have a life beyond “The Family.”

Along the way, she’s loaded up her car and started over, trading one life for the next. She’s taken pilgrimages to the sights of her youth, been kept in solitary confinement, dated a lot of women, dabbled in drugs, and eventually found herself as what she always wanted to be: a writer. Here, as she sweeps through the underbelly of America–relying on friends, family, and strangers alike–she begins to excavate a new identity even as her past continues to trail her and color her world, relationships, and perceptions of self.

Many memoirs written by former cult members detail what life was like in the cult — but Lauren Hough knows that isn’t the end of her story. In Leaving Isn’t the Hardest Thing, Hough details life after leaving “The Family,” (once called the Children of God, now known as the Family International). Through essays, Hough talks about her time as a bouncer at a gay club, a cable guy, and a member of the U.S. Air Force (before she was discharged for being gay during the time of Don’t Ask, Don’t Tell).

Hough has always had a problem keeping her thoughts to herself… “I had problems with [the teachings] pretty early on, but I couldn’t express those,” she told NPR. “Probably the earliest thing I learned is just keep your mouth shut — and I couldn’t, which was a problem.” This inability to hold back is what makes Leaving Isn’t The Hardest Thing shine.

The book is divisive — a quick peek at Goodreads reviews will show you a plethora of one- or five-star reviews, with little in between. But Hough’s writing speaks about her life more harshly than any naysayer could. From her childhood, running from country to country to escape the law, to her young adult years in the military, to her 10 years as a cable guy, Hough doesn’t pull any punches when it comes to critiquing the systems that attempted to hold her back along the way.

Leaving Isn’t The Hardest Thing isn’t a light read, but it’s a compelling one, and one that will leave the reader wanting more. Thankfully, Leaving isn’t the end of Hough’s story either.

Leaving Isn’t The Hardest Thing is available for checkout from the Galesburg Public Library.