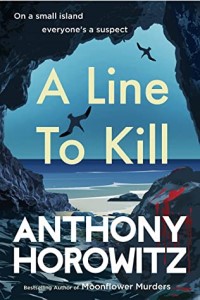 From the publisher: When Ex-Detective Inspector Daniel Hawthorne and his sidekick, author Anthony Horowitz, are invited to an exclusive literary festival on Alderney, an idyllic island off the south coast of England, they don’t expect to find themselves in the middle of murder investigation—or to be trapped with a cold-blooded killer in a remote place with a murky, haunted past. Both a brilliant satire on the world of books and writers and an immensely enjoyable locked-room mystery, A Line to Kill is a triumph—a riddle of a story full of brilliant misdirection, beautifully set-out clues, and diabolically clever denouements.

Anthony Horowitz is the author of a popular teen spy series, adult mysteries, and a number of beloved TV series. In his Hawthorne and Horowitz series, the author inserts himself, as himself, as a character into the stories, which is kind of bizarre but also fun. The fictional Anthony Horwitz comes off as a bit of a clueless dolt. He was approached in the first book by a disgraced detective hoping to get some money by contributing to a nonfiction crime series written by the fictional Anthony Horowitz.

Got that? It’s a big of a mind-twister, but as I already mentioned, a lot of fun. The series is a love letter to classic murder mysteries and detective stories. Hawthorne is clearly the brains of the pair, but also deeply mysterious and often unlikable. Still, he has the charisma, and the author gets ignored when Hawthorne is present. This causes a strain between the duo, even while fictional Horowitz admires Hawthorne’s detecting skills.

The plot of A Line to Kill gives us a chance to meet a bunch of quirky writers at a small literary festival. I had to wonder as a reader if any of them are based on writers Horowitz knows. He also pokes fun at himself and his own reputation as a writer, and he seems to be having a joyful time doing it. The author drops clues right and left, leaving the reader to wonder – is that important? Is that a red herring? And Hawthorne slowly puts it all together as the rest of us scratch our heads.

I love Horowitz’s subtle humor and phrasing, as in this passage when a séance takes place: “So at ten o’clock, I made my way down to the hotel’s screening room, which was certainly not the sort of place Noel Coward would have chosen to set a séance.” (ch. 20) Also this passage, when a body is discovered at the seaside: “Even before we got out of the car, we could tell something was wrong. A small crowd had gathered on the very edge of the grass, all of them looking out to sea, and there was something about their body language, the way they stood, that warned us that although they might be birdwatchers, they were not now watching birds.” (ch. 22)

If you like very English detective bromances where the bros don’t really seem to like each other, and detective stories that overwhelm you with characters and plot devices, you might enjoy this series.

I read an advance reader copy of A Line to Kill from Netgalley. The third book in the series, it is already out in the UK but will be published in the U.S. in October. The Galesburg Public Library owns the first two books and will own the third in regular print, large print, audio, and as ebooks. If you want to get started, book one is The Word Is Murder.

A Line to Kill will be available for checkout from the Galesburg Public Library when it is published in October.