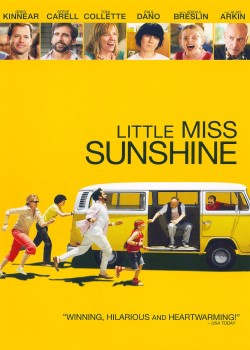 From the distributor: A family determined to get their young daughter into the finals of a beauty pageant take a cross-country trip in their VW bus.

This 2006 tragicomedy follows the highly dysfunctional yet lovable Hoover family. When their seven-year-old daughter Olive gets a chance to compete in the Little Miss Sunshine pageant, the Hoovers have to figure out how to get her to Redondo Beach, California, some 800 miles away from their home in Albuquerque. There’s only one problem… well, no… there are several problems. Her dad Richard is a mean, sad man that’s trying to make a career for himself as a public/motivational speaker and making no money in the process. Mom Sheryl just picked up her brother, Frank, from the hospital after a recent suicide attempt, and he’s on 24/7 watch. Dwayne is Olive’s teenage brother who’s taken a vow of silence until he can leave for flight school training. He’s Sheryl’s child from a previous marriage and ignores his stepdad (and everyone, really) as much as possible. Lastly there’s Edwin, Olive’s dance coach and Richard’s dad, who’s been forced to live with them after being kicked out of his retirement community for developing a nasty drug habit.

Little Miss Sunshine is hilarious, from the chaotic dinner during which the group comes to terms with the fact that they all have to go on the trip, to when Olive takes the stage at the final pageant to do a dance number no one has seen yet but Grandpa. Along the way they have several heartfelt scenes that humanize even the most ridiculous or unlikeable members of the family, too, so it’s not as shallow as it may seem. I highly recommend this film for fans of movies centered around well-written characters. I enjoyed Little Miss Sunshine when I first watched it as a preteen and have only grown to love it more with subsequent viewings.

The star-studded cast includes Greg Kinnear as Richard, Abigail Breslin as Olive, Toni Collette as Sheryl, Alan Arkin as Edwin, Steve Carell as Frank, and Paul Dano as Dwayne. It also did very well when it was released, earning four Oscar nominations and winning two: one for Best Original Screenplay (won by writer Michael Arndt) and Best Supporting Actor (won by Alan Arkin).

Little Miss Sunshine is available for checkout at the Galesburg Public Library.