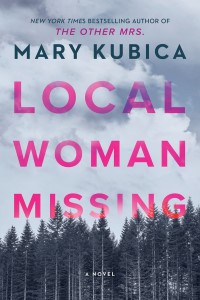 From the publisher: Shelby Tebow is the first to go missing. Not long after, Meredith Dickey and her six-year-old daughter, Delilah, vanish just blocks away from where Shelby was last seen, striking fear into their once-peaceful community. Are these incidents connected? After an elusive search that yields more questions than answers, the case eventually goes cold. Now, eleven years later, Delilah shockingly returns. Everyone wants to know what happened to her, but no one is prepared for what they’ll find.

I grabbed this for airport/plane entertainment because I wanted an adrenaline rush and I’m really good at freaking myself out, and I’m a local woman! But… no adrenaline rush. Bummer. This required way too much suspension of disbelief.

Kubica goes back and forth between present day and the past just before the aforementioned characters went missing, and she alternates characters’ points of view. I may be a curmudgeon but… maybe just pick one? Either alternate timelines or characters, not both? Kate (family friend), Meredith, and Leo (Delilah’s brother) take turns narrating, although Leo narrates as though he’s writing directly to Delilah. Every character is flat and boring, despite the author’s attempts to assign them personalities–family friend Bea is an adult woman who sounds like she dresses like a tween who just discovered Nirvana. Bea is cool. Bea is confident. Bea is good with kids. Bea loves her wife Kate. (This is similar to how Kubica actually describes her characters. Not even kidding.)

Meredith is a doula who is never actually seen doula-ing, and for someone whose livelihood is basically ensuring the mother-child relationship starts off on a positive note, she’s not very good at her own relationship with her youngest. But that’s just a tiny detail that Kubica pretty much just throws in as a red herring and doesn’t really address beyond that. It’s honestly baffling that Leo’s character is as stable as he’s presented, and it makes him so unbelievable and boring at the same time.

Obviously I won’t get into spoilers here, but the ending is trash. There’s one thousand percent no way that things would have gone down the way they did.

But hey, this has a whopping 4.10 stars on Goodreads from 59,244 ratings as of this writing. Clearly I’m missing something. It’s an entertaining hate-read, if you’re into that sort of thing. I’m one of Those People who reads things and thinks, “I could write something way better than this,” and then never actually writes a single word, so feel free to add a pound of salt to this review.

Local Woman Missing is available at the Galesburg Public Library.