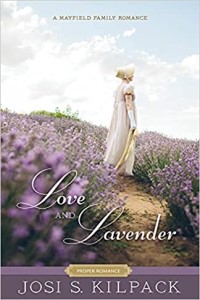 From the publisher: Hazel Stillman is a woman of rare independence and limited opportunities. Born with a clubbed foot, she was sent away as a child and devoted herself to scholarship and education. When her uncle presents her with the prospect of a substantial inheritance if she marries, Hazel is offended. Duncan Penhale has a brilliant mind and thrives on order and process. He does not expect to marry because he likes his solitary life, shared only with his beloved cat. Hazel and Duncan believe they have found a solution to both of their problems: marry one another, receive their inheritances, and then part ways to enjoy their individual paths. But when her uncle stipulates that they must live together for one year before receiving their inheritances, Hazel and Duncan reluctantly agree. At the end of the year, will they go their separate ways or could an unlikely marriage have found unsuspecting love?

Josi S. Kilpack excels at writing about people who don’t often appear in historical fiction. In A Heart Revealed, she wrote about a vain woman coping with total hair loss. In this book, our heroine has a club foot and our hero has autism. (Imagine Sheldon Cooper from The Big Bang Theory in 1822 England and you have a pretty good understanding already of Duncan Penhale.)

Both Hazel and Duncan are prickly and at times annoying but the author presents them very sympathetically. This is book four in a series about a middle-aged man offering inheritances to various young people in his life if they marry. However, you definitely do not need to read the first three books to enjoy this one. They are more or less standalone stories. If you do want to start with book one, it’s Promises and Primroses.

This is a very slow moving story. Hazel and Duncan are friends before they marry, but it takes a long time for that relationship to move beyond friendship. These two characters live together and go about their normal daily lives. Hazel has medical issues from her foot; Duncan struggles with people being put off by his ways and his dislike of being touched unexpectedly. If you like action, there’s not much here – few romantic interactions between the main characters, and no highwaymen or thieving street urchins. It’s probably unrealistic that life would have gone so well for this pair in 1822, but it’s nice to think so.

I read an advance reader copy of Love and Lavender from Netgalley. It is scheduled to be published in November 2021. In the meantime, the library owns 10 other titles by Josi S. Kilpack if you’d like to explore her work.

Love and Lavender will be available for checkout from the Galesburg Public Library when it is released in November.