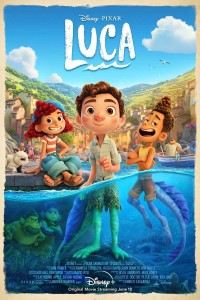 From the distributor: On the Italian Riviera, an unlikely but strong friendship grows between a human being and a sea monster disguised as a human.

Another year, another Pixar flick — the Disney industrial complex abides. Formerly an independent company and then semi-autonomous entity working in collaboration with Disney, Pixar has now been fully under the thumb of the Mouse House monolith for a decade and a half, and it’s fair to wonder how much of the imagination and artistry that distinguished works like Toy Story and WALL·E has been flattened as a direct result of their subsidiarization. Late 2015 inaugurated a run of mid efforts for the company (a deluge of sequels, the stinkers The Good Dinosaur and Onward, and the better but far from tops Coco and Soul), and it’s easy to see Pixar’s last inspired gasps in the late-aughts and early 2010s, as years-in-development projects were released and Disney’s typical artistic homogenization became an operating mode.

Still, the truth is that Pixar makes films for kids, a demographic that won’t much care about any of the above. What initially made the studio’s films such a powerhouse in the animation world was their ability to transcend mere kids’ cinema designation, appealing fairly equally to adults and exhibiting a formula-busting tendency toward storytelling that reinvigorated the template-heavy schema of Disney’s ‘80s/’90s heyday. If what’s being produced now is less, it’s merely the nature of the corporate beast, an alchemical process wherein art becomes capital. A cynical take, to be sure, but all the more justification for approaching such content with gentleness; kids will soon become adults, and most will lose the capacity for doe-eyed wonder. In this way, animated films are one of culture’s greatest nostalgia machines, which is its own, worthy form of escapist fantasy.

Snark aside, Pixar’s latest film, Luca, marks the objectively least imaginative work yet from the animation studio. That’s not blanket criticism, but rather mere observation: it pretty directly cribs The Little Mermaid, incorporating (and tweaking) selkie lore, and affixing it to the familiar imagery of Italian seaside summers. The plot concerns the title’s Luca, a young sea monster who can, like all of his kind, assume human form when he goes on land — that is, as long as he stays dry, as any bit of water will mottle him with neon scales, flippers, etc. But an ever-obedient son, Luca has heretofore respected his parents wishes to never go ashore, instead spending his days planted on a rock, shepherding over a school of fish. But when he meets a brash young sea monster named Alberto, who lives primarily on land when not diving for trinkets and treasures to fill his treehouse with, Luca gets caught up in a journey that will lead him into a triathlon-type contest that substitutes pasta-eating for running. It also plants him in the crosshairs of a weirdo, bike-riding, middle-aged villain who likes to eat big sandwiches and who pretends to be a kid — which the whole community seems to accept, definitely bizarre; animated film logic, I guess — so that he can keep winning said contest.

But it’s precisely this low concept that also makes Luca feel so breezy, dispensing with any pressure to come up with a trademark Pixar conceit, and instead imbuing its simple setting with gorgeous animation and light, youthful hijinks. It all ends up in a place of genuine pathos, its obligatory happy ending enriched by imbuing it with the newfound maturity, selflessness, and independence that marks the precipice of adulthood. It’s all perfectly sweet, and also more confident in its easy-going nature than other recent Pixar works. Perhaps the studio’s golden age is over, but that’s no reason that something as visually striking and emotionally earnest as Luca can’t still make for a pleasant enough viewing experience for kids, or for those willing to put their kid cap on for a brief 90 minutes.

Luca will be available for checkout at the Galesburg Public Library on DVD and Blu-Ray.