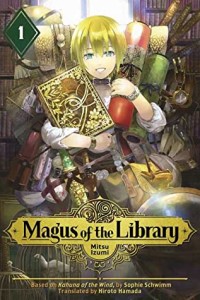 From the publisher: A story about a poor boy swept away by a kind library mage and the (literal) magic of reading, Magus of the Library is a beautifully-drawn, spirited fantasy adventure, like a Fullmetal Alchemist for all ages! Ages 13 and up.

Magus of the Library is a manga series in which a young, poor, outcast boy named Theo strives to satisfy his love of reading, and find a way to give back to the books that have given him so much. He dreams of one day visiting the great library of Aftzaak, the City of Books… but for now he’d settle for at least being allowed to use the library in his hometown.

Theo’s shaggy blond hair can’t disguise his pointy ears, which identify him as mixed race in a world where different races don’t often get along. As if that’s not bad enough, he’s also poor. So Theo gets bullied a lot by other kids and isn’t allowed to use the local library. All of that gets upended when a team of Kafna – librarians from the Central Library who take the mission of libraries very seriously – come to town. Theo finds the experience life-changing and becomes even more determined to reach the Central Library in Aftzaak.

Though this is a fantasy series, it’s definitely grounded in a solid understanding of the mission of real-world libraries. Theo learns from the Kafna about how libraries are dedicated to serving communities, fighting against censorship, and ensuring access to information for everyone. Some creative liberties are of course taken for the story – real world libraries don’t often have to deal with magical tomes containing restless fire spirits, for example – but overall I love the way the library and librarians are portrayed in this series.

As later volumes reveal more about the world Theo lives in, readers learn that society was ravaged by a race war not too long ago, and that the Kafna played a key role in helping end that war and open communication between the various races. All the different cultures are described including, including major cultural and religious texts that shaped them. The richly detailed world feels very believable without seeming to be a direct allegory for any real-world cultures.

Volumes 1-4 of Magus of the Library are available for checkout from the Galesburg Public Library in the graphic novel section.