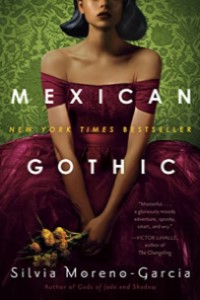 From the publisher: An isolated mansion. A chillingly charismatic aristocrat. And a brave socialite drawn to expose their treacherous secrets. . .

Silvia Moreno-Garcia has written quite a few novels, but this is the first of hers that I’ve read. I’m glad I read it, and it was a quick read, but it wasn’t blow-your-mind-amazing. It was predictable, pulling from many of the gothic foremothers and forefathers, but that set this up to be a softer texture of spooky. I wish I would have saved it for a cool fall evening, so if you’re reading this and I end up convincing you to read Mexican Gothic, please do yourself a favor and wait until it’s at least below 65 degrees and you have hot cocoa and flannels handy.

Noemí Taboada is in her early twenties, a chic socialite who glams her way through parties and keeps only the best cigarettes in her purse. After her father receives a frantic “help me” letter from Catalina, Noemí’s cousin, she heads to High Place in El Triunfo, a mountainous region of Mexico that Moreno-Garcia based on Hidalgo (specifically Mineral del Monte, according to the author’s notes on Goodreads). The inhabitants of the house are peculiar–Catalina’s husband is intimidating yet supposedly charming, his father is so ancient he’s described as reminding Noemí of a mummy, the service workers hardly speak, there’s no talking allowed during dinner, no going into town, and it’s just all around an unsettling situation that’s exacerbated as Noemí begins to experience nightmarish sleepwalking episodes. The youngest of the bunch, Francis, seems to be the only one who doesn’t make Noemí feel crazy for feeling like something is off about the Doyle family.

It’s hard to go into much detail without giving away spoilers. Every detail feels as though it’s an obvious clue to help the reader solve this “big secret” about the house and the Doyle family, so it’s kind of easy to call the ending before you’re even halfway through. Noemí talks people into giving her pieces of the Doyle family history throughout, and early in the novel she’s told: “He wanted the house built quickly and he wanted a great garden, in the English style, with rose beds. He even brought boxes filled with earth from Europe to make sure the flowers would take.” Sound familiar? Little details that harken back to early horror and gothic fiction are sprinkled so liberally throughout that they eventually feel as though they aren’t actually adding any value to the novel.

The predictability early on wouldn’t be such a bummer if the characters had been complex enough to sustain interest through to the end, but they were pretty basic cookie-cutter archetypes, and the writing itself can feel lazy at times. A prime example of this is the way Noemí’s thought process is explained: “She had a vague thought that it would also be easier to run out of the room if she was standing. She wasn’t sure why she thought this.” Maybe she thought this because the man looming over her had already been portrayed as a slimeball on the cusp of violence? Another example: one of the recurring images throughout the house is a snake eating its own tail, or if you’re not looking closely, circles. Noemí thinks, “It could be that they were talking in circles. And wouldn’t that be ironic? Circles.” Dear every author who has ever written or ever will write: please stop over-explaining to your reader. Stop it. It makes for some vapid-sounding characters.

For those who enjoy Daphne du Marier, Shirley Jackson (I know, I’ve brought her up in just about every review I’ve written), Charlotte Perkins Gilman, Emily Brontë, etc., you may find this one entertaining, but just be prepared to have your plot twists spelled out from the beginning.

Mexican Gothic is available for checkout from the Galesburg Public Library.