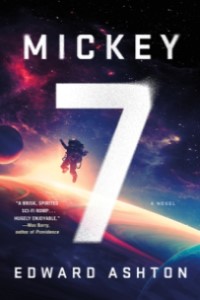 From the publisher: Mickey7 is an Expendable: a disposable employee on a human expedition sent to colonize the ice world Niflheim. Whenever there’s a mission that’s too dangerous—even suicidal—the crew turns to Mickey. After one iteration dies, a new body is regenerated with most of his memories intact. After six deaths, Mickey7 understands the terms of his deal…and why it was the only colonial position unfilled when he took it.

Mickey7 is a fun but thought-provoking read about a group of humans in the distant future trying to settle on an inhospitable planet. Mickey Barnes is the unfortunate volunteer Expendable. He is intentionally placed in dangerous situations because if he dies, his old body can be recycled, a new body can be created, and his consciousness can be placed in the new body. Due to an unfortunate and deadly event that took place some years prior, multiple duplicates are not allowed – but Mickey7 escapes from a situation expected to kill him and finds that Mickey8 has already been created. What now?

Mickey’s best friend Berto is that guy you are still friends with even though you aren’t exactly sure why. His girlfriend is one of the only colonists who treats him like a normal person, and his commander is the worst boss you ever had. So it is easy to slip into Mickey’s world, despite the alien landscape. The book is surprisingly philosophical. Mickey7 has only a few extra experiences that Mickey8 does not, and yet one of those experiences makes him a different person with a different outlook when a crisis arises.

The book does not take itself too seriously. There are pointed comments about how we are currently treating the planet Earth, but they are not heavy handed. It has been 600 years since anyone has heard from old Earth – but life elsewhere in the cosmos is still a struggle. Mickeys 7 and 8 read a number of stories about colonization attempts that went bad – not enough food, fights with local sentient species, planets outside the Goldilocks zone, humans being humans and killing each other. It’s a reminder that we’d be better off taking care of Earth than looking for new homes.

Mickey7 reminded me of books by Andy Weir. It’s not as funny and definitely does not contain as much science and math, but if you enjoyed The Martian and Project Hail Mary, you might enjoy Mickey7.

I read an advance reader copy of Mickey7 from Netgalley. It is scheduled to be published on February 15 and will be available at the Galesburg Public Library in print and as a downloadable ebook and audiobook.