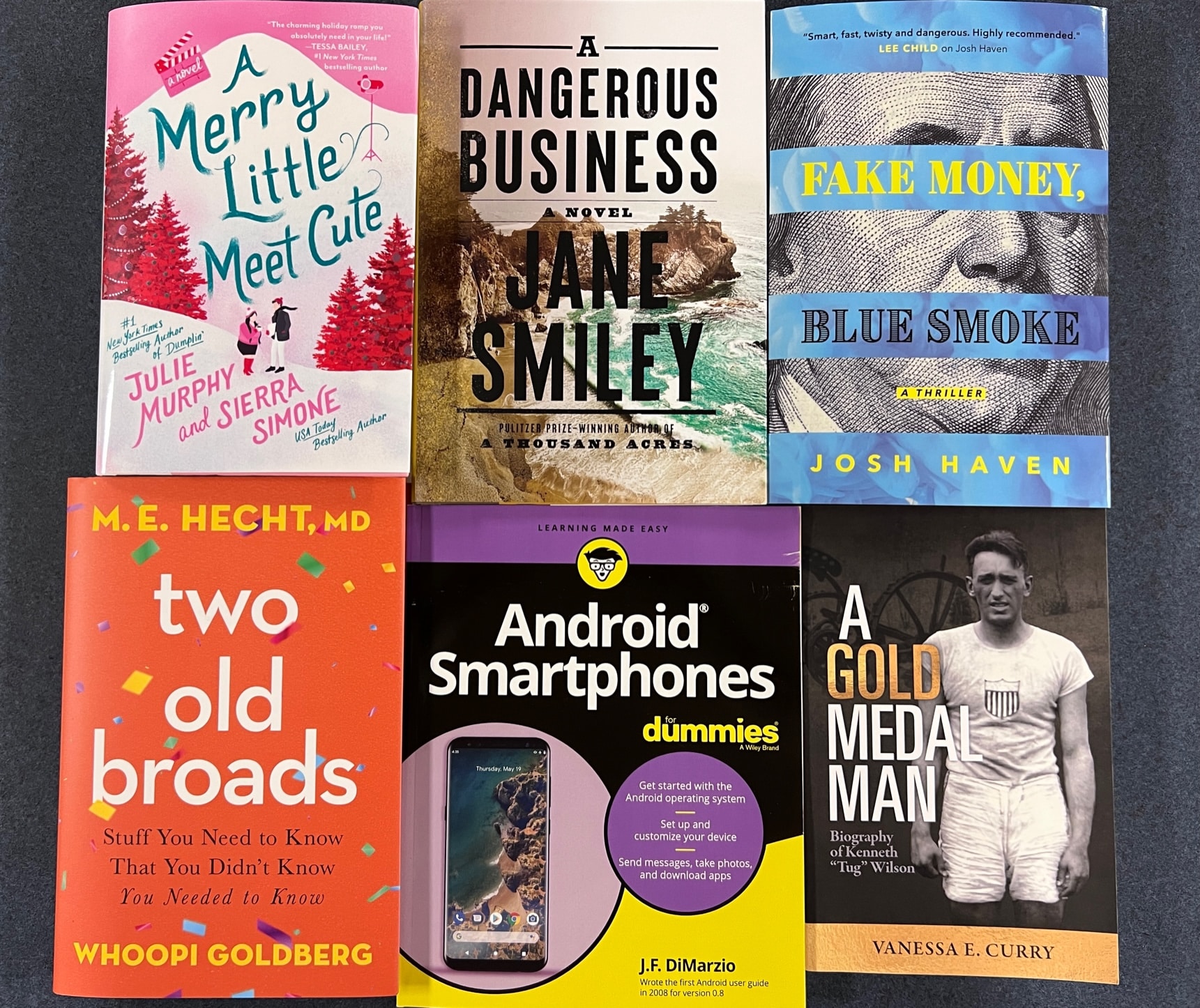 Visit the library to grab these new fiction and nonfiction releases before someone else does! They’ll be hitting the shelves this week, so stay tuned. If you see something that interests you, give us a call or visit the catalog to put one on hold.

Bee Hobbes (aka Bianca Von Honey) has a successful career as a plus-size adult film star. With a huge following and two supportive moms, Bee couldn’t ask for more. But when Bee’s favorite producer casts her to star in a Christmas movie he’s making for the squeaky-clean Hope Channel, Bee’s career is about to take a more family-friendly direction.

Forced to keep her work as Bianca under wraps, Bee quickly learns this is a task a lot easier said than done. Though it all becomes worthwhile when she discovers her co-star is none other than childhood crush Nolan Shaw, an ex-boy band member in desperate need of career rehab. Nolan’s promised his bulldog manager to keep it zipped up on set, and he will if it means he’ll be able to provide a more stable living situation for his sister and mom.

But things heat up quickly in Christmas Notch, Vermont, when Nolan recognizes his new co-star from her ClosedDoors account (oh yeah, he’s a member). Now Bee and Nolan are sneaking off for quickies on set, keeping their new relationship a secret from the Hope Channel’s execs. Things only get trickier when the reporter who torpedoed Nolan’s singing career comes snooping around—and takes an instant interest in mysterious newcomer Bee.

And if Bee and Nolan can’t keep their off-camera romance behind the scenes, then this merry little meet cute might end up on the cutting room floor.

A DANGEROUS BUSINESS by Jane Smiley

Monterey, 1851. Ever since her husband was killed in a bar fight, Eliza Ripple has been working in a brothel. It seems like a better life, at least at first. The madam, Mrs. Parks, is kind, the men are (relatively) well behaved, and Eliza has attained what few women have: financial security. But when the dead bodies of young women start appearing outside of town, a darkness descends that she can’t resist confronting. Side by side with her friend Jean, and inspired by her reading, especially by Edgar Allan Poe’s detective Dupin, Eliza pieces together an array of clues to try to catch the killer, all the while juggling clients who begin to seem more and more suspicious.

Eliza and Jean are determined not just to survive, but to find their way in a lawless town on the fringes of the Wild West—a bewitching combination of beauty and danger—as what will become the Civil War looms on the horizon. As Mrs. Parks says, “Everyone knows that this is a dangerous business, but between you and me, being a woman is a dangerous business, and don’t let anyone tell you otherwise …”

When former platoon sergeant Matt Kubelsky is paroled from Ray Brook Federal Correctional Institute in upstate New York, he’s surprised to find his ex-girlfriend waiting for him out in the parking lot. An ex-girlfriend he’s spent years pining for after she dumped him and stopped answering his letters. An ex-girlfriend who wonders if her apparently criminally-hardened ex-boyfriend can help her out of some extra-legal difficulty of her own.

During the years Matt was in prison, Kelly Haggerty discovered she couldn’t earn a satisfactory living as an artist, so she turned her artistic talents to counterfeiting foreign currency—and ended up embroiled in an international money laundering intrigue. Now she hopes she can get herself out of trouble with a cleverly-plotted theft and one last enormous score.

The missing ingredient is someone Kelly can trust to do the dirty work, recruiting career criminals who won’t flinch at the opportunity to make good money by whatever means necessary. And Matt is happy to oblige, as it seems like the perfect opportunity to settle the score with the men responsible for ruining his life and putting him away for a crime he didn’t commit. The heist—a horseback robbery of valuable artwork from a speeding Amtrak train—seems to be going perfectly, until one of the players starts to suspect he’s been paid in counterfeit bills…

TWO OLD BROADS: STUFF YOU NEED TO KNOW THAT YOU DIDN’T KNOW YOU NEEDED TO KNOW by Dr. M. E. Hecht & Whoopi Goldberg

Whoopi joins Dr. Hecht in a lively conversation about growing older with no apologies. Dr. Hecht, who passed away a few short months prior to publication, shares her 93 years of wisdom with Whoopi and their fellow “broads.” Together, these two kindred spirits will help you:

Imminently practical and?rooted firmly in the adage that getting older is not for sissies, Two Old Broads is the aging book for the ages. You’ve survived the past; why not embrace the present and prepare for the future so you thrive and find more time to laugh along the way?

Android Smartphones For Dummies is the all-new guide to Android phones with the familiar Dummies charm everyone loves. This book will give Android rookies a crash-course in how to use these popular phones. You’ll go beyond the basics of texting and taking photos—we’ll walk you through all the pro tips and tricks for customizing your phone, optimizing all your settings, using social media (safely), and making the most of apps and widgets. We’ll even teach you how to make calls, because phones can still do that.

New and inexperienced Android users will love the helpful, step-by-step guidance and friendly advice in Android Smartphones For Dummies.

If not for her love of auctions and her curiosity, author Vanessa Curry may never have learned about one of the most influential people in the history of amateur sports—Kenneth “Tug” Wilson—who just happened to have been born in her hometown of Atwood, Illinois.

What she found in a box she purchased from an Atwood estate started Curry on a path of discovery about the remarkable life of a local farm boy whose career took him all over the world. Wilson never forgot his roots, but his historic contributions in promoting the benefits of amateur sports were nearly lost. Honoring his accomplishments through this biography ensures his legacy enriches the lives of generations to come.