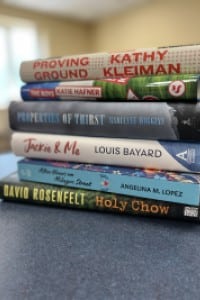 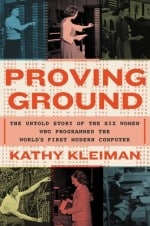 PROVING GROUND: THE UNTOLD STORY OF THE SIX WOMEN WHO PROGRAMMED THE WORLD’S FIRST MODERN COMPUTER by Kathy Kleiman

After the end of World War II, the race for technological supremacy sped on. Top-secret research into ballistics and computing, begun during the war to aid those on the front lines, continued across the United States as engineers and programmers rushed to complete their confidential assignments. Among them were six pioneering women, tasked with figuring out how to program the world’s first general-purpose, programmable, all-electronic computer–better known as the ENIAC— even though there were no instruction codes or programming languages in existence. While most students of computer history are aware of this innovative machine, the great contributions of the women who programmed it were never told — until now. 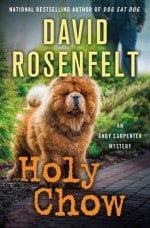 Retired lawyer Andy Carpenter’s calling has always been running the Tara Foundation. The dog rescue organization places hundreds of dogs in new homes every year. It’s added up to so many dogs and new owners that Andy can’t even do the math. But there’s one dog—and one owner—Andy will always remember.

About a year ago, Rachel Morehouse came to the foundation looking for a companion. In her sixties and recently widowed, Rachel wanted a senior dog that also needed someone. Andy took a liking to her, Rachel took a liking to Lion, an older Chow Chow, and the rest is history.

That is, until Rachel calls Andy begging for a favor: If Rachel dies, will Andy take care of Lion if her stepson cannot? Andy agrees, no questions asked, and promptly forgets about it… until he receives a call from Rachel’s estate to attend her will reading. Which is where he meets Rachel’s stepson, Tony, who is promptly arrested for his stepmother’s murder. And he wants Andy to prove his innocence.

Andy has continued to learn more about the woman he so greatly admired and the businesses she ran, and holy chow, was this woman impressive. The person who killed her deserves to be held accountable, and if Tony is to be believed, they’re still out there. And that possibility is too much for Andy to remain on the sidelines. 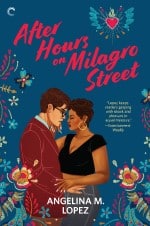 AFTER HOURS ON MILAGRO STREET by Angelina M. Lopez

Professor Jeremiah Post, the poor handsome man, is in fact standing in the way of Alejandra “Alex” Torres turning Loretta’s, her grandmother’s bar, into a viable business. The hot brainiac who sleeps in one of the upstairs tenant rooms already has all of her Mexican American family’s admiration; she won’t let him have the bar and building she needs to resurrect her career, too.

Alex blowing into town has rocked Jeremiah to his mild-mannered core, but the large, boisterous Torres clan is everything he never had. He doesn’t believe Alex has the best interest of her family, their community or the bar’s legacy in mind. To protect all three, he’ll stand up to the tough and tattooed bartender with whom he now shares a bedroom wall—and resist the insta-lust they both feel.

But when an old enemy threatens Loretta’s and the surrounding neighborhood, Alex and Jeremiah must combine forces. It will take her might and his mind to save the home they both desperately need.Whp! 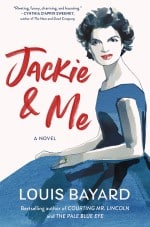 JACKIE & ME by Louis Bayard

In 1951, former debutante Jacqueline Bouvier is hard at work as the Inquiring Camera Girl for a Washington newspaper. Her mission in life is “not to be a housewife,” but when she meets the charismatic congressman Jack Kennedy at a Georgetown party, her resolution begins to falter. Soon the two are flirting over secret phone calls, cocktails, and dinner dates, and as Jackie is drawn deeper into the Kennedy orbit, and as Jack himself grows increasingly elusive and absent, she begins to question what life at his side would mean. For answers, she turns to his best friend and confidant, Lem Billings, a closeted gay man who has made the Kennedy family his own, and who has been instructed by them to seal the deal with Jack’s new girl. But as he gets to know her, a deep and touching friendship emerges, leaving him with painfully divided alliances and a troubling dilemma: Is this the marriage she deserves? 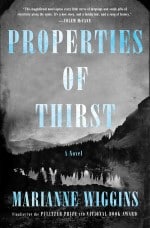 PROPERTIES OF THIRST by Marianne Wiggins

Rockwell “Rocky” Rhodes has spent years fiercely protecting his California ranch from the LA Water Corporation. It is here where he and his beloved wife Lou raised their twins, Sunny and Stryker, and it is here where Rocky has mourned Lou in the years since her death.

As Sunny and Stryker reach the cusp of adulthood, the country teeters on the brink of war. Stryker decides to join the fight, deploying to Pearl Harbor not long before the bombs strike. Soon, Rocky and his family find themselves facing yet another incomprehensible tragedy.

Rocky is determined to protect his remaining family and the land where they’ve loved and lost so much. But when the government decides to build a Japanese-American internment camp next to the ranch, Rocky realizes that the land faces even bigger threats than the LA watermen he’s battled for years. Complicating matters is the fact that the idealistic Department of the Interior man assigned to build the camp, who only begins to understand the horror of his task after it may be too late, becomes infatuated with Sunny and entangled with the Rhodes family. 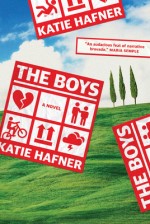 THE BOYS by Katie Hafner

When introverted Ethan Fawcett marries Barb, he has every reason to believe he will be delivered from a lifetime of solitude. One day Barb brings home two young brothers, Tommy and Sam, for them to foster, and when the pandemic hits, Ethan becomes obsessed with providing a perfect life for the boys. Instead of bringing Barb and Ethan closer together, though, the boys become a wedge in their relationship, as Ethan is unable to share with Barb a secret that has been haunting him since childhood. Then Ethan takes Tommy and Sam on a biking trip in Italy, and it becomes clear just how unusual Ethan and his children are—and what it will take for Ethan to repair his marriage. This hauntingly beautiful debut novel—a bold and original high-wire feat—is filled with humor and surprise.