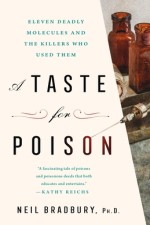 A TASTE FOR POISON: ELEVEN DEADLY MOLECULES AND THE KILLERS WHO USED THEM by Neil Bradbury

As any reader of murder mysteries can tell you, poison is one of the most enduring—and popular—weapons of choice for a scheming murderer. It can be slipped into a drink, smeared onto the tip of an arrow or the handle of a door, even filtered through the air we breathe. But how exactly do these poisons work to break our bodies down, and what can we learn from the damage they inflict?

In a blend of popular science, medical history, and true crime, Dr. Neil Bradbury explores the morbidly captivating method of murder from a cellular level. Alongside real-life accounts of murderers and their crimes—some notorious, some forgotten, some still unsolved—are the stories of the poisons involved: eleven molecules of death that work their way through the human body and, paradoxically, illuminate the way in which our bodies function.

Drawn from historical records and current news headlines, A Taste for Poison weaves together the tales of spurned lovers, shady scientists, medical professionals and political assassins to show how the precise systems of the body can be impaired to lethal effect through the use of poison. From the deadly origins of the gin & tonic cocktail to the arsenic-laced wallpaper in Napoleon’s bedroom. 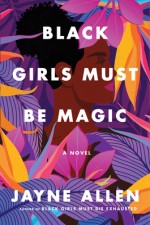 BLACK GIRLS MUST BE MAGIC by Jayne Allen

For Tabitha Walker, her grandmother’s old adage, “Black girls must die exhausted” is becoming all too true. Discovering she’s pregnant–after she was told she may not be able to have biological children–Tabitha throws herself headfirst into the world of “single mothers by choice.” Between her job, doctor’s appointments, and preparing for the baby, she’s worn out. And that’s before her boss at the local news station starts getting complaints from viewers about Tabitha’s natural hair.

When an unexpected turn of events draws Marc–her on and off-again ex-boyfriend–back into her world with surprising demands, and the situation at work begins to threaten her livelihood and her identity, Tabitha must make some tough decisions about her and her baby’s future. It takes a village to raise a child, and Tabitha turns to the women who have always been there for her.

Bolstered by the fierce support of Ms. Gretchen, her grandmother’s best friend, the counsel of her closest friends Laila and Alexis, and the calming presence of her doula Andouele, Tabitha must find a way to navigate motherhood on her own terms. Will she harness the bravery, strength, and self-love she’ll need to keep “the village” together, find her voice at work, and settle things with Marc before the baby arrives? 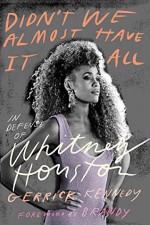 DIDN’T WE HAVE IT ALL: IN DEFENSE OF WHITNEY HOUSTON by Gerrick Kennedy

Didn’t We Almost Have It All is a portrait of the woman behind one of the most famous voices in the world; a performer whose struggles and insecurities with race, sexuality, addiction, identity, abuse, faith, and class ultimately contributed to a heartbreaking demise that was devastating and inevitable in equal measure. Whitney Houston’s story is a cautionary tale about the perils of fame and addiction, but it’s also a story rife with emotions that are universal to the human experience. She lived much of her life trying to please others—her parents, her family, her mentor Clive Davis, the public—all people who made her a prisoner to her successes and failures in the last decade of her life. This groundbreaking new biography is centered around firsthand reporting that weaves together the story of a rising star and, for the first time, digs into the dark underbelly of the abuse, addiction, and anxiety that caused Houston’s very public fall from grace and ultimately her death. 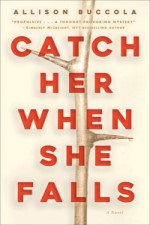 CATCH HER WHEN SHE FALLS by Allison Buccola

Ten years ago, my boyfriend killed my best friend.

When Micah Wilkes was a senior in high school, her boyfriend was convicted of murdering her best friend, Emily. A decade later, Micah has finally moved on from the unforgivable betrayal and loss. Now the owner of a bustling coffee shop in her small hometown in Pennsylvania, she’s happily coupled up with another old high school friend, the two having bonded over their shared sorrow.

But when reminders of her past begin appearing at her work and home, Micah begins to doubt what she knows about Emily’s death. Questions raised on a true crime blog and in an online web sleuthing forum force her to reexamine her memories of that fateful night. She told the truth to the investigators on the case, but was there another explanation for Emily’s murder? A stranger in the woods. An obsessive former classmate. Or the internet’s favorite suspect: Joshua, Emily’s outcast younger brother who hasn’t been seen since his sister’s death.

As Micah delves deeper into the case, she feels her grip on reality loosening, her behavior growing more and more secretive and unhinged. As she races to piece together the truth about that night ten years ago, Micah grapples with how things could have gone so wrong and wonders whether she, too, might be next to disappear. 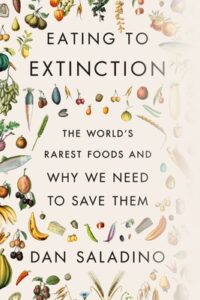 EATING TO EXTINCTION: THE WORLD’S RAREST FOODS AND WHY WE NEED TO SAVE THEM by Dan Saladino

Over the past several decades, globalization has homogenized what we eat, and done so ruthlessly. The numbers are stark: Of the roughly six thousand different plants once consumed by human beings, only nine remain major staples today. Just three of these–rice, wheat, and corn–now provide fifty percent of all our calories. Dig deeper and the trends are more worrisome still:

The source of much of the world’s food–seeds–is mostly in the control of just four corporations. Ninety-five percent of milk consumed in the United States comes from a single breed of cow. Half of all the world’s cheese is made with bacteria or enzymes made by one company. And one in four beers drunk around the world is the product of one brewer.

If it strikes you that everything is starting to taste the same wherever you are in the world, you’re by no means alone. This matters: when we lose diversity and foods become endangered, we not only risk the loss of traditional foodways, but also of flavors, smells, and textures that may never be experienced again. And the consolidation of our food has other steep costs, including a lack of resilience in the face of climate change, pests, and parasites. Our food monoculture is a threat to our health–and to the planet. 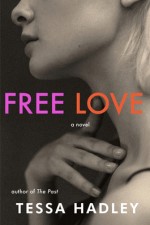 1967. While London comes alive with the new youth revolution, the suburban Fischer family seems to belong to an older world of conventional stability: pretty, dutiful homemaker Phyllis is married to Roger, a devoted father with a career in the Foreign Office. Their children are Colette, a bookish teenager, and Hugh, the golden boy.

But when the twenty-something son of an old friend pays the Fischers a visit one hot summer evening, and kisses Phyllis in the dark garden after dinner, something in her catches fire. Newly awake to the world, Phyllis makes a choice that defies all expectations of her as a wife and a mother. Nothing in these ordinary lives is so ordinary after all, it turns out, as the family’s upheaval mirrors the dramatic transformation of the society around them.