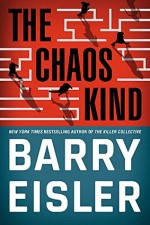 THE CHAOS KIND by Barry Eisler

Assistant US Attorney Alondra Diaz hates traffickers. And she’s determined to put one of America’s most powerful financiers, Andrew Schrader, in prison forever for his crimes against children. But Schrader has videos implicating some of the most powerful members of the US national security state. To eliminate Diaz, the powers that be bring in a contractor: Marvin Manus, an implacable assassin whose skills have been forged in intelligence, the military, and the hardest prisons.

Enter former Marine sniper Dox and black-ops veteran Daniel Larison with an unusual assignment: not to kill Diaz, but to keep her alive.

A lot of players are determined to acquire the videos and the blackmail power they represent. But with Seattle sex-crimes detective Livia Lone, “natural causes” killer John Rain, and Mossad honey-trap specialist Delilah, the good guys might just have a chance. They’re not going to play by anyone else’s rules. They’re not going to play by any rules at all. They want a different kind of fight. The chaos kind. 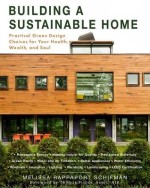 The green building movement has produced hundreds of “how-to” books and websites that are filled with tips about green building and what homeowners should do to go green. While helpful and informative, when it comes to making actual purchasing and installation decisions, these books do not make it any easier for a homeowner to prioritize against a budget. Here, Schifman shares her knowledge and experience for others to use in their journey toward a greener way of living.

Whether the reader is building a new home or doing a minor remodel, a homeowner needs a framework by which to guide their decisions. These decisions are based on values, and the author posits that there are really only three reasons to go green:

For Our Health: By building more sustainably, we reduce our exposure to harmful chemicals and toxins.

For Our Wealth: By building a more durable home and being more efficient with resources like water and electricity, we reduce our monthly utility bills and ongoing maintenance expenses.

For Our Soul: Collectively doing the right thing for our planet does make a difference—and that is soul-nourishing.

Learn the logistics of choosing windows, insulation, appliances, and lighting. Find out about FSC certified wood and about using reclaimed materials. Here is everything you need to make your home sustainable. 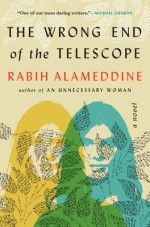 THE WRONG END OF THE TELESCOPE by Rabih Alameddine

Mina Simpson, a Lebanese doctor, arrives at the infamous Moria refugee camp on Lesbos, Greece, after being urgently summoned for help by her friend who runs an NGO there. Alienated from her family except for her beloved brother, Mina has avoided being so close to her homeland for decades. But with a week off work and apart from her wife of thirty years, Mina hopes to accomplish something meaningful, among the abundance of Western volunteers who pose for selfies with beached dinghies and the camp’s children. Soon, a boat crosses bringing Sumaiya, a fiercely resolute Syrian matriarch with terminal liver cancer. Determined to protect her children and husband at all costs, Sumaiya refuses to alert her family to her diagnosis. Bonded together by Sumaiya’s secret, a deep connection sparks between the two women, and as Mina prepares a course of treatment with the limited resources on hand, she confronts the circumstances of the migrants displacement, as well as her own constraints in helping them. 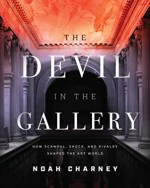 THE DEVIL IN THE GALLERY: HOW SCANDAL, SHOCK, AND RIVALRY SHAPED THE ART WORLD by Noah Charney

Scandal, shock and rivalry all have negative connotations, don’t they? They can be catastrophic to businesses and individual careers. A whiff of scandal can turn a politician into a smoking ruin. But these potentially disastrous “negatives” can and have spurred the world of fine art to new heights. A look at the history of art tells us that rivalries have, in fact, not only benefited the course of art, from ancient times to the present, but have also helped shape our narrative of art, lending it a sense of drama that it might otherwise lack, and therefore drawing the interest of a public who might not be drawn to the objects alone. There would be no Sistine Chapel by Michelangelo had rival Raphael not tricked the pope into assigning him the commission, certain that Michelangelo, who had never before worked with frescoes, would botch the job and become a laughing stock.

Scandal and shock have proven to be powerful weapons when harnessed and wielded willfully and well. That scandal is good for exposure has been so obviously the case that many artists have courted it intentionally, which we will define as shock: intentionally overturning expectations of the majority in a way that traditionalist find dismaying or upsetting, but which a certain minority avant-garde find exciting. From Damien Hirst presenting the public with a shark embalmed in formaldehyde and entombed in a glass case to Marcel Duchamp trying to convince the art community that a urinal is a great sculpture shock has been a key promotional tool.

The Devil in the Gallery is a guided tour of the history of art through it scandals, rivalries, and shocking acts, each of which resulted in a positive step forward for art in general and, in most cases, for the careers of the artists in question. In addition to telling dozens of stories, lavishly illustrated in full color, of such dramatic moments and arguing how they not only affected the history of art but affected it for the better, we will also examine the proactive role of the recipients of these intentionally dramatic actions: The art historians, the critics and even you, the general public. The Devil likes to lurk in dark corners of the art world, morphing into many forms. Let us shed light upon him. 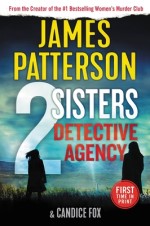 Attorney Rhonda Bird returns home after a long estrangement when she learns her father has died. There she makes two important discoveries: her father stopped being an accountant and had opened up a private detective agency, and she has a teenage half sister named Baby. Baby brings in a client to the detective agency, a young man who claims he was abducted. During the course of the investigation, Rhonda and Baby become entangled in a dangerous case involving a group of overprivileged young adults who break laws for fun, their psychopath ringleader, and an ex-assassin victim who decides to hunt them down for revenge. 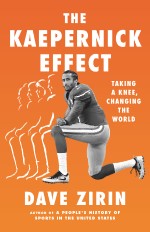 THE KAEPERNICK EFFECT: TAKING A KNEE, CHANGING THE WORLD by Dave Zirin

In 2016, amid an epidemic of police shootings of African Americans, the celebrated NFL quarterback Colin Kaepernick began a series of quiet protests on the field, refusing to stand during the U.S. national anthem. By “taking a knee,” Kaepernick bravely joined a long tradition of American athletes making powerful political statements. This time, however, Kaepernick’s simple act spread like wildfire throughout American society, becoming the preeminent symbol of resistance to America’s persistent racial inequality.

Critically acclaimed sports journalist and author of A People’s History of Sports in the United States, Dave Zirin chronicles “the Kaepernick effect” for the first time, through interviews with a broad cross-section of professional athletes across many different sports, college stars and high-powered athletic directors, and high school athletes and coaches. In each case, he uncovers the fascinating explanations and motivations behind a mass political movement in sports, through deeply personal and inspiring accounts of risk-taking, activism, and courage both on and off the field. 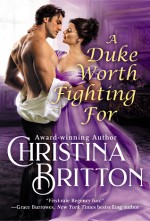 A DUKE WORTH FIGHTING FOR by Christina Britton

To protect the dukedom from an incompetent and greedy cousin, Daniel Hayle, Duke of Carlisle, has promised to find a bride in London this season. But the idea of facing ballrooms and card parties is as intimidating as any battlefield in France, including the fight at Waterloo that left him terribly scarred. Perhaps a month on the Isle of Synne can provide him with the practice necessary to find a wife who can tolerate him enough to give him an heir.

Margery Kitteridge has been mourning her husband for four years, and while she’s not ready to consider marriage again, she does miss intimacy with a partner. When Daniel asks for help navigating Synne’s social scene, and they accidentally kiss, she realizes he’s the perfect person with whom to have an affair. As they begin to confide in one another, Daniel discovers that he’s unexpectedly connected to Margery’s late husband, and she will have to decide if she can let her old love go for the promise of a new one. 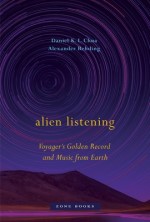 In 1977 NASA shot a mixtape into outer space. The Golden Record aboard the Voyager spacecrafts contained world music and sounds of Earth to represent humanity to any extraterrestrial civilizations. To date, the Golden Record is the only man-made object to have left the solar system. Alien Listening asks the big questions that the Golden Record raises: Can music live up to its reputation as the universal language in communications with the unknown? How do we fit all of human culture into a time capsule that will barrel through space for tens of thousands of years? And last but not least: Do aliens have ears?

The stakes could hardly be greater. Around the extreme scenario of the Golden Record, Chua and Rehding develop a thought-provoking, philosophically heterodox, and often humorous Intergalactic Music Theory of Everything, a string theory of communication, an object-oriented ontology of sound, and a Penelopean model woven together from strands of music and media theory. The significance of this exomusicology, like that of the Golden Record, ultimately takes us back to Earth and its denizens. By confronting the vast temporal and spatial distances the Golden Record traverses, the authors take listeners out of their comfort zone and offer new perspectives in which music can be analyzed, listened to, and thought about–by aliens and humans alike.