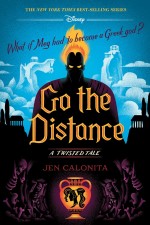 GO THE DISTANCE by Jen Calonita

After Hercules proves he’s a true hero and regains his godship, all seems right in the world. That is, until Zeus tells Meg that she can’t be with Hercules because she’s, well, mortal. Luckily, Hera has a solution, offering Meg a chance to prove herself worthy of a spot on Mt. Olympus — as a god. All Meg has to do is complete a mysterioius quest.

The mission? Oh, just to rescue her ex’s current wife from the Underworld. The ex-boyfriend she saved by selling her soul to Hades. The ex-boyfriend who immediately moved on to someone else while she was stuck in the Underworld. Can Meg put her past behind her and use her quick-wit to defeat monsters and gods alike, including the nefarious Hades? Will she finally figure out her place and contribution to the world? Or will her fear of commitment have her running away from an eternity of godhood with Herc? 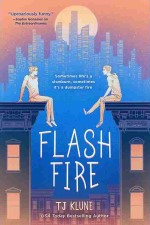 Nick landed himself the superhero boyfriend of his dreams, but with new heroes arriving in Nova City it’s up to Nick and his friends to determine who is virtuous and who is villainous. Which is a lot to handle for a guy who just wants to finish his self-insert bakery AU fanfic. 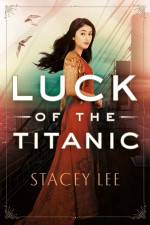 LUCK OF THE TITANIC by Stacey Lee

Valora Luck has two things: a ticket for the biggest and most luxurious ocean liner in the world, and a dream of leaving England behind and making a life for herself as a circus performer in New York. Much to her surprise, though, she’s turned away at the gangway; apparently, Chinese people aren’t allowed into America.

But Val has to get on that ship. Her twin brother, Jamie, who has spent two long years at sea, is on board, as is an influential circus owner. Thankfully, there’s not much a trained acrobat like Val can’t overcome when she puts her mind to it.

As a stowaway, Val should keep her head down and stay out of sight. But the clock is ticking and she has just seven days as the ship makes its way across the Atlantic to find Jamie, audition for the circus owner, and convince him to help get them both into America. 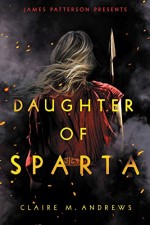 Seventeen-year-old Daphne has spent her entire life honing her body and mind into that of a warrior, hoping to be accepted by the unyielding people of ancient Sparta. But an unexpected encounter with the goddess Artemis—who holds Daphne’s brother’s fate in her hands—upends the life she’s worked so hard to build. Nine mysterious items have been stolen from Mount Olympus, and if Daphne cannot find them, the gods’ waning powers will fade away, the mortal world will descend into chaos, and her brother’s life will be forfeit.

Guided by Artemis’s twin—the handsome and entirely-too-self-assured god Apollo—Daphne’s journey will take her from the labyrinth of the Minotaur to the riddle-spinning Sphinx of Thebes, team her up with mythological legends such as Theseus and Hippolyta of the Amazons, and pit her against the gods themselves. 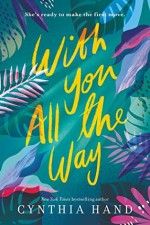 WITH YOU ALL THE WAY by Cynthia Hand

Ada’s life is a mess. She just caught her boyfriend cheating on her after a humiliating attempt at losing her virginity, and she’s had it up to here with her gorgeous older sister’s unsolicited advice.

But things really hit the fan during a family vacation in Hawaii, where Ada discovers her own mother is having an affair. Apparently, everyone is falling into bed with people they shouldn’t. Everyone except Ada. But when Ada decides she’s going to stop trying and start doing—sex, that is—her best laid plan overlooks an inconvenient truth: Feelings, romantic or not, always get in the way. 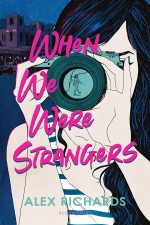 WHEN WE WERE STRANGERS by Alex Richards

Seventeen-year-old Evie Parker is devastated in the wake of her father’s sudden death. But she knows something her mother doesn’t: the day of his heart attack, her dad was planning to move out. After finding his packed bags, an impulsive Evie puts everything away, desperate to spare her mom more heartache.

To make matters worse, Evie soon learns the reason her father was going to leave: he had been dating his twenty-two-year-old receptionist, Bree, who is now six months pregnant. Desperate to distract herself, Evie signs up for a summer photography class where she meets a motley crew of students, including quirky and adorable Declan. Still, Evie can’t stop thinking about her father’s mistress. Armed with a telephoto lens, she caves to her curiosity, and what starts as a little bit of spying on Bree quickly becomes full-blown stalking. And when an emergency forces Evie to help Bree, she learns there’s more to the story than she ever knew… 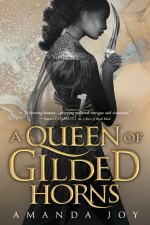 A QUEEN OF GILDED HORNS by Amanda Joy

Now on the run, Eva is desperate for answers about her transformation and her true heritage. Along with Aketo, a small contingent of guards, and the sister she could not kill, Eva flees Ternain in hopes of finding friends and allies to the north–not to mention Baccha–to help her decide what to do next. Princess Isa is a difficult, unremorseful captive, and Eva knows better than to trust her sister, but she wants to. Despite their history, Eva is convinced that to survive the growing unrest in the queendom, she and her sister must make peace. Since the Entwining ceremony, Eva’s and Isa’s lives have been bonded, and each can only die by the other’s hand. This perhaps provides an opening for a truce and a more hopeful future for both the sisters and the queendom, if only Isa would see reason and give up the battle for the throne.

With the two princesses on the run, the Queendom of Myre is on the brink of a revolution. And without Baccha to guide and train her magick, Eva must find a way not only to survive her own metamorphosis, but to unite all the people of Myre, including her sister, by finally taking the Ivory Throne.