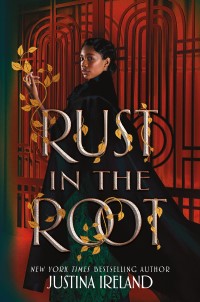 RUST IN THE ROOT by Justina Ireland

It is 1937, and Laura Ann Langston lives in an America divided—between those who work the mystical arts and those who do not. Ever since the Great Rust, a catastrophic event that blighted the arcane force called the Dynamism and threw America into disarray, the country has been rebuilding for a better future. And everyone knows the future is industry and technology—otherwise known as Mechomancy—not the traditional mystical arts.

Laura disagrees. A talented young mage from Pennsylvania, Laura hopped a portal to New York City on her seventeenth birthday with hopes of earning her mage’s license and becoming something more than a rootworker

But six months later, she’s got little to show for it other than an empty pocket and broken dreams. With nowhere else to turn, Laura applies for a job with the Bureau of the Arcane’s Conservation Corps, a branch of the US government dedicated to repairing the Dynamism so that Mechomancy can thrive. There she meets the Skylark, a powerful mage with a mysterious past, who reluctantly takes Laura on as an apprentice.

As they’re sent off on their first mission together into the heart of the country’s oldest and most mysterious Blight, they discover the work of mages not encountered since the darkest period in America’s past, when Black mages were killed for their power—work that could threaten Laura’s and the Skylark’s lives, and everything they’ve worked for. 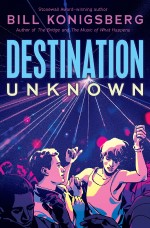 The first thing I noticed about C.J. Gorman was his plexiglass bra.

So begins Destination Unknown. It’s 1987 in New York City, and Micah is at a dance club, trying to pretend he’s more out and outgoing than he really is. C.J. isn’t just out–he’s completely out there, and Micah can’t help but be both attracted to and afraid of someone who travels so loudly and proudly through the night.

A connection occurs. Is it friendship? Romance? Is C.J. the one with all the answers… or does Micah bring more to the relationship that it first seems? As their lives become more and more entangled in the AIDS epidemic that’s laying waste to their community, and the AIDS activism that will ultimately bring a strong voice to their demands, whatever Micah and C.J. have between them will be tested, strained, pushed, and pulled–but it will also be a lifeline in a time of death, a bond that will determine the course of their futures. 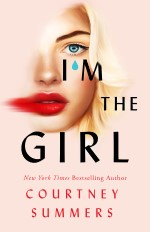 I’M THE GIRL by Courtney Summers

When sixteen-year-old Georgia Avis discovers the dead body of thirteen-year-old Ashley James, she teams up with Ashley’s older sister, Nora, to find and bring the killer to justice before he strikes again. But their investigation throws Georgia into a world of unimaginable privilege and wealth, without conscience or consequence, and as Ashley’s killer closes in, Georgia will discover when money, power and beauty rule, it might not be a matter of who is guilty—but who is guiltiest.

A spiritual successor to the 2018 breakout hit, Sadie, I’m the Girl is a masterfully written, bold, and unflinching account of how one young woman feels in her body as she struggles to navigate a deadly and predatory power structure while asking readers one question: if this is the way the world is, do you accept it? 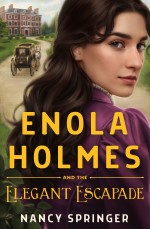 ENOLA HOLMES AND THE ELEGANT ESCAPADE by Nancy Springer

Enola Holmes, the much younger sister of Sherlock, is now living independently in London and working as a scientific perditorian (a finder of persons and things). But that is not the normal lot of young women in Victorian England. They are under the near absolute control of their nearest male relative until adulthood. Such is the case of Enola’s friend, Lady Cecily Alastair. Twice before Enola has rescued Lady Cecily from unpleasant designs of her caddish father, Sir Eustace Alastair, Baronet. And when Enola is brusquely turned away at the door of the Alastair home it soons becomes apparent that Lady Cecily once again needs her help.

Affecting a bold escape, Enola takes Lady Cecily to her secret office only to be quickly found by the person hired by Lady Cecily’s mother to find the missing girl—Sherlock Holmes himself. But the girl has already disappeared again, now loose on her own in the unforgiving city of London.

Even worse, Lady Cecily has a secret that few know. She has dual personalities—one, which is left-handed, is independent and competent; the other, which is right-handed is meek and mild. Now Enola must find Lady Cecily again—before one of her personalities gets her into more trouble than she can handle and before Sherlock can find her and return her to her father. Once again, for Enola, the game is afoot. 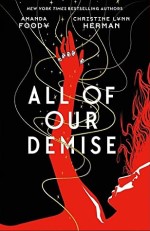 ALL OF OUR DEMISE by Amanda Foody and Christine Lynn Herman

“I feel like I should warn you: this is going to be absolutely brutal.”

For the first time in this ancient, bloodstained story, the tournament is breaking. The boundaries between the city of Ilvernath and the arena have fallen. Reporters swarm the historic battlegrounds. A dead boy now lives again. And a new champion has entered the fray, one who seeks to break the curse for good… no matter how many lives are sacrificed in the process.

As the curse teeters closer and closer to collapse, the surviving champions each face a choice: dismantle the tournament piece by piece, or fight to the death as this story was always intended.

Long-held alliances will be severed. Hearts will break. Lives will end. Because a tale as wicked as this one was never destined for happily ever after. 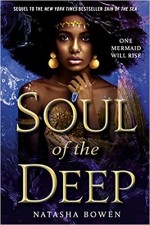 SOUL OF THE DEEP by Natasha Bowen

One life.
One choice.
One sacrifice.

To save those closest to her, Simi traded away everything: her freedom, her family, and the boy she loves. Now she is sworn to serve a new god, watching over the Land of the Dead at the bottom of the ocean.

But when signs of demons begin to appear, it’s clear there are deeper consequences of Simi’s trade. These demons spell the world’s ruin . . . and because of Simi, they now have a way into the human realm.

With the fate of the world at stake, Simi must break her promise and team up with a scheming trickster of a god. And if they succeed, perhaps Simi can also unbreak her heart along the way, and find herself again.