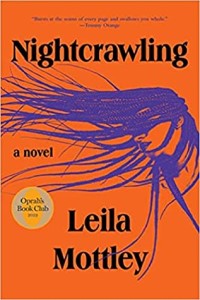 From the publisher: A dazzling, unforgettable novel about a young black woman who walks the streets of Oakland and stumbles headlong into the failure of its justice system—a debut that announces a blazingly original voice.

Nightcrawling is good. Really good. Gripping, heart wrenching, sick to your stomach good. It’s a novel, but it feels like the diary of a real teenager. Kiara. Her father is dead. Her mom is in a halfway house. She’s trying to take care of a neighbor child whose mother neglects him. Her brother is too busy trying to make it as a rapper to bring in money in any way besides dealing drugs. The rent is going up. Kiara is a high school dropout who is too young to get a job. So she starts selling herself – first to anyone on the street, then to the cops who pick her up. Sometimes they pay her, sometimes they just tell her she’s lucky they don’t put her in jail. Sometimes they use her at parties. They know she’s under age and has no other options.

People, even friends and family, act like she made a choice because she wanted to sell her body on the street. Everyone she knows is dealing with their own stuff. No one realizes (or cares) how desperate her situation is, and how deep she is in with the cops.

The author of Nightcrawling is an Oakland Youth Poet Laureate who was born and raised and still lives in Oakland, California. Her familiarity with the city shows in Nightcrawling (which is her first novel). The plot was inspired by a real incident in the Oakland Police Department in 2015. The 17-year-old protagonist speaks with a rhythm like poet:

“Alé is one of the lucky ones. Her family’s restaurant is a neighborhood staple, and even though they can’t afford more than the one bedroom above the shop, she’s never been hungry a day in her life. It’s all degrees of being alive out here and every time I hug her or watch her skate down the sidewalk, I can feel how strong her heartbeat is. It doesn’t matter how lucky you are, though, because you still gotta work day in and day out trying to stay alive while someone else falls through the cracks, ashes scattered in the bay.” (p. 16 of the advance reader copy)

Some readers may find the prose too much like poetry, but since the book is narrated by one character, it totally worked for me. Kiara’s voice is strong.

There are a lot of secondary characters but I was able to keep them straight because the author’s observations about them ring hard and true. For instance, of the newly appointed chief of police, she writes: “Talbot stands up as we enter and we complete every cross of handshaking. She’s short, racially ambiguous in that way that makes me sure people asked her what she was growing up and she probably just responded with ‘human’ because when you blur every line it’s easier to become rigid and frank like Talbot.” (p. 190 of the advance reader copy)

The ending fell a bit flat for me, but this book reads like real life, not a Hollywood movie, so that’s okay. Kiara’s journey is worth reading about. This book isn’t like The Hate U Give, but it reminds me of it in all the best ways. If you enjoy reading realistic stories that feature memorable voices and force you to confront some uncomfortable truths, I highly recommend Nightcrawling.

I read an advance reader copy of Nightcrawling from Netgalley.

Nightcrawling is available for checkout from the Galesburg Public Library.