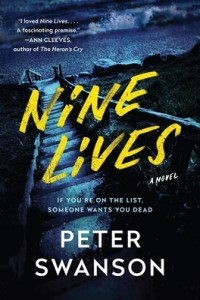 From the publisher: If you’re on the list, someone wants you dead.

Creepy yet oddly mesmerizing mystery with an unusual narrative style. Nine people are on a list that is mailed (or in one case, hand-delivered) to them. Then it becomes clear that someone is killing the nine people on the list. There is a lot of jumping around in point-of-view. We hear not just from the people on the list but from law enforcement and a hired killer. Some of the people on the list are not nice people. Some are. Two form a relationship because of the list. And then their points of view stop adding to the story as each is killed in turn.

It’s kind of a weird way to tell a tale, but it worked for me as a reader. The book pays homage to Agatha Christie’s classic mystery And Then There Were None. I’ve read it before but clearly need to read it again. There were characters I did not want to see die, and one that certainly deserved to die. How are they all connected? That is the main mystery of the book. I did not guess the identity of the murderer, or the act that set the plot in motion, although I did predict a final twist.

The author gets extra credit from me for a subtle allusion to T.S. Eliot’s Love Song of J. Alfred Prufrock: he “watched the girls come and go, talking of Leonardo DiCaprio.” Ha!

Peter Swanson’s writing style really engages me, and I will return for other books by the author. I read an advance reader copy of Nine Lives from Netgalley.

Nine Lives will be published on March 15, and the Galesburg Public Library will own it in various formats. The library owns several of Swanson’s other titles, including the excellent Eight Perfect Murders.